Can cannabis save Florida’s waterways? 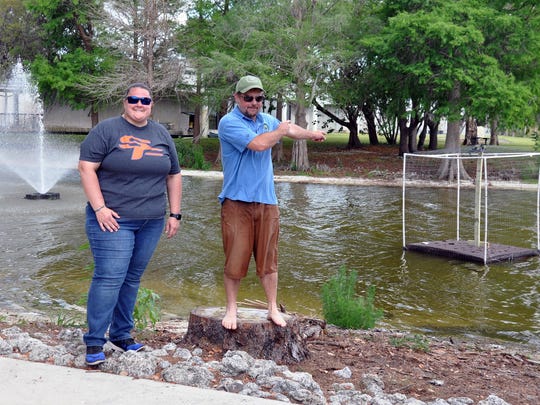 It may not be the Yankees-Dodgers, but here’s a matchup the oddsmakers should pay attention to, because the stakes are higher. Especially with the Florida economy reeling from the coronavirus.

When it comes to leeching pollutants out of the water, which plant is more voracious: toxic algae or cannabis? Or, more specifically, the kind of cannabis without the psychoactive THC — industrial hemp. The answer could be worth billions either way.

The first leg of the challenge is progressing at two small lakes in Avon Park, on one of South Florida State College’s three campuses in Central Florida. And if the experiment shakes down the way entrepreneur Steve Edmonds predicts, the outcome could solve a riddle no one has been able to figure out — how to clean up an ailing Lake Okeechobee. The fix could mitigate the scourge of red tide, and starve the karenia brevis algae that fouls Florida’s waterways on a seasonal basis.

Approved by the Florida Department of Agriculture and Consumer Services, this Florida Industrial Hemp Pilot Project aims to discover just how much of the two main nutrients that fuel toxic algae — nitrogen and phosphorus — can be drained from polluted water by cannabis. And if, at the end of the 190-day trial, the anticipated levels are achieved, it could be “a real game-changer,” according to SFSC project manager Kendall Carson.

Triggered largely by runoff water saturated with heavy metals, fertilizers and other pollutants, the bloom wreaked most of its havoc in Southwest Florida. But nearly 250 manatees died statewide, and the stinging brevetoxins made life miserable for waterfront residents and businesses. Which got Edmonds to thinking …

More: It was a very dry March: Why crunchy grass and a low Lake O should worry you

“How can we deal with all this excess nitrogen and phosphorus that’s coming in, millions of acre-feet of water discharge at a time, and killing the estuaries in my hometown?” wondered the native of Palm City, which borders the St. Lucie River. “And I talked to a lot of (marijuana) growers who were saying, wow, that kind of nitrogen and phosphorus for a ph (acidity level) would be really nice for a grow.

“I measured nitrogen and phosphorus and ph in Lake Okeechobee and the levels were pretty damn close to what growers need; in fact, they spend a lot of time and money trying to create water with those kinds of nutrients in it.”

The naturally occurring phenomenon has already killed manatees,
sea turtles and millions of pounds of fish.

Red tide is a naturally occurring phenomenon that is likely energized by contaminated freshwater discharged into the Gulf of Mexico. During the most recent episode in 2017-18, the damage demanded $14.5 million in emergency funds to remove uncounted tons of fishkill from the beaches. That protracted outbreak collapsed coastal tourist economies, where financial losses climbed well into the billions.

And with another long hot summer right around the corner, nature isn’t waiting for Florida or anyone else to recover from COVID-19.

To clean up the 440,000-acre Lake O, Edmonds estimates scaling up to between 10,000 and 20,000 acres of hydroponic cannabis plants, a process that could take five to 10 years. Those plants could then be harvested into everything from high quality fiber to biodegradable plastic. Hemp’s role in creating sustainable water infrastructure across Florida, he says, could jump-start a billion-dollar growth industry.

The first step, however, is replicating a Canadian study, which indicated that one hemp plant can process up to 200 kilograms of nitrogen and 160 kilograms of phosphorus. It took Edmonds nearly a decade of lobbying to help make today’s experimental scenario possible, under provisions of the Florida Industrial Hemp Pilot Project. He completed his search for a partner late last year.

That’s when SFSC coordinator of agricultural programs Kendall Carson met Edmonds by chance at a conference in Orlando. She was intrigued by the pitch, and brought the idea back to President Thomas Leitzel, who jumped on it.

The research will be conducted using two 4-foot wide hydroponic “biomats,” a mesh platform some 9 to 10 inches deep. Cannabis sprouts will be inserted into those floating structures and placed onto two campus lakes in Highlands County, where they will be monitored throughout the spring and summer.

“I’m probably going to miss out on bioremediation opportunities because I’m limited to strains that produce less than .3% THC,” Edmonds says. “Because the plant, when it gets stressed, produces THC – that’s its natural defense mechanism. And if we’re cleaning toxins and heavy metals and nutrients from the water, it’s gonna get stressed.”

To inhibit THC production, solar floodlights will bathe the sprouts for several hours after sundown to arrest their reproductive development. “Male plants are thought to do their best bioremediation in first 60 days of their growth, so plants will not go into flower or seed cycle,” Edmonds days. “So we eliminate the invasiveness.”

Carson says SFSC recognizes the urgency of the testing, and is committing lab techs, researchers and students to work the project.

“There are a lot of businesses and organizations that always need help cleaning up after these blooms and red tide,” she says, “so I think we could get a ton of support for it.

“People know we need to start turning things around soon, or we won’t be able to turn back. We’re desperate to find something, and people are open to proven data.”

Among the ironies Edmonds sees in the resurgence of cannabis is how its status is beginning to catch up to what it was a century ago, before its demonization went legal with the federal Marihuana Tax Act of 1937. Until then, cannabis could be legally purchased in pharmacies and drug stores. The American Medical Association strongly opposed the bill.

Before 1937, the THC version of marijuana was routinely prescribed for medicinal purposes, and its industrial fibers were staples of American industry. But Edmonds says cannabis didn’t stand a chance against powerful commercial pressures.

Press baron William Randolph Hearst, for instance, steered his print production away from hemp and into wood paper, thanks to his interests in timber. His chain’s editorials routinely trashed marijuana. And the DuPont chemical empire had just created nylon, whose durability was in direct competition with hemp. Political allies in Congress backed the quarantine, and hemp farmers were forced to convert to new crops.

“This is fact, this is history,” Edmonds says, “whether we want to talk about it or not.”

Nearly a hundred years later, weed is back in the ring again, poised for a showdown with a budget-busting killer algae. So stay tuned.

The Florida Fish and Wildlife Conservation Commission has begun the process of developing a Lake Okeechobee management plan. But is the lake simply too big to manage?