The SAFE Banking Act passed the House in late 2019, but stalled in the Senate. (miralex/iStock)

House Speaker Nancy Pelosi unveiled a new $3 trillion coronavirus relief package on Tuesday that includes long-sought banking reform for the legal cannabis industry. While the bill includes more relief for impacted businesses, cannabis companies will not likely be eligible to receive those funds.

The 1,800-page bill, named the Health and Economic Recovery Omnibus Emergency Solutions Act, or HEROES Act, represents the next phase of COVID-19 relief aimed at helping Americans struggling through the current public health and economic shock.

The new bill does not include small business relief that cannabis companies can access. Previous rounds of coronavirus relief funding were denied to cannabis companies based on the illegal status of marijuana under federal law. Specifically, an outdated Small Business Administration (SBA) policy prohibited cannabis businesses from applying for federal COVID-19 relief funds. Language to amend SBA eligibility was not included in the bill.

In late April, more than 40 members of Congress signed multiple letters to Congressional leaders demanding SBA reform. Rep. Earl Blumenauer (D-Oregon) has introduced legislation to address the problem, and a coalition of reform advocates along with criminal justice and civil rights groups have urged members of Congress to adopt this reform.

“The inclusion of the SAFE Banking Act in the CARES 2 package is a positive development, but one that’s akin to applying a band-aid to a gaping wound,” said NORML Political Director Justin Strekal. “In the majority of states, these cannabis businesses have been deemed essential during this pandemic. But at the federal level, they are being cast aside by Congress. Those small cannabis businesses facing tough economic times are essentially being told by Congress to shutter their doors and fire their employees.”

Relief funds could save thousands of jobs

That funding could make a huge difference in the lives of cannabis workers nationwide. A national survey conducted by Leafly and the National Cannabis Roundtable, released earlier today, found that tens of thousands of jobs could be saved if Congress were to allow federal COVID-19 stimulus funds to flow through to state-legal companies. Nearly one-third of cannabis companies surveyed said they could go out of business without COVID-19 relief.

The survey of 484 cannabis retailers, growers, processors, and hardware and service providers was conducted across all legal states between April 20 and May 5, 2020. Of those companies, 85% said they would be able to save jobs with access to stimulus money, and 30% said they will go out of business without access.

“Cannabis businesses are dealing with the same hardships as other small business without the same critical financial tools and reliable banking services,” said Saphira Galoob, executive director of the National Cannabis Roundtable. “Providing access to banking services removes some of the shackles that are holding back the full potential of the fastest growing sector of the US economy.”

This is why cannabis is a cash-only business

Ever since the beginnings of the legal cannabis in 1996, this has been a cash-only industry. That’s due to outdated federal banking laws that were intended to curb money laundering by illegal drug cartels. Those laws didn’t foresee the coming of state-legal cannabis, so a grower or retailer licensed by a legal state today is still seen as an illegal drug runner within the context of federal banking laws.

As a consequence, customers can’t use credit cards or debit cards at most legal stores. Many cannabis companies have had their accounts closed without notice. Some workers in the industry can’t get home or car loans.

In some states, smaller banks and credit unions do offer simple deposit accounts for state-licensed cannabis companies. But those accounts come with extremely burdensome documentation requirements, and are expensive to maintain as a result.

Safe harbor in the bill

The cannabis banking language in the HEROES Act would offer what’s known as “safe harbor” to  depository institutions that work with cannabis companies. That means the FDIC and the NCUA, the two federal banking guarantors, may not cancel or limit a bank or credit union’s depository insurance solely based on the fact that the bank provides financial services to a cannabis business or service provider.

The bill also specifies that federal regulators can’t penalize “or otherwise discourage” a bank from providing services to a cannabis company, or to state and local authorities who regulate the cannabis industry.

There are protections for individual workers, too. The bill prohibits federal regulators from recommending or encouraging banks to refuse or cancel the personal accounts of clients who work for legitimate cannabis companies. 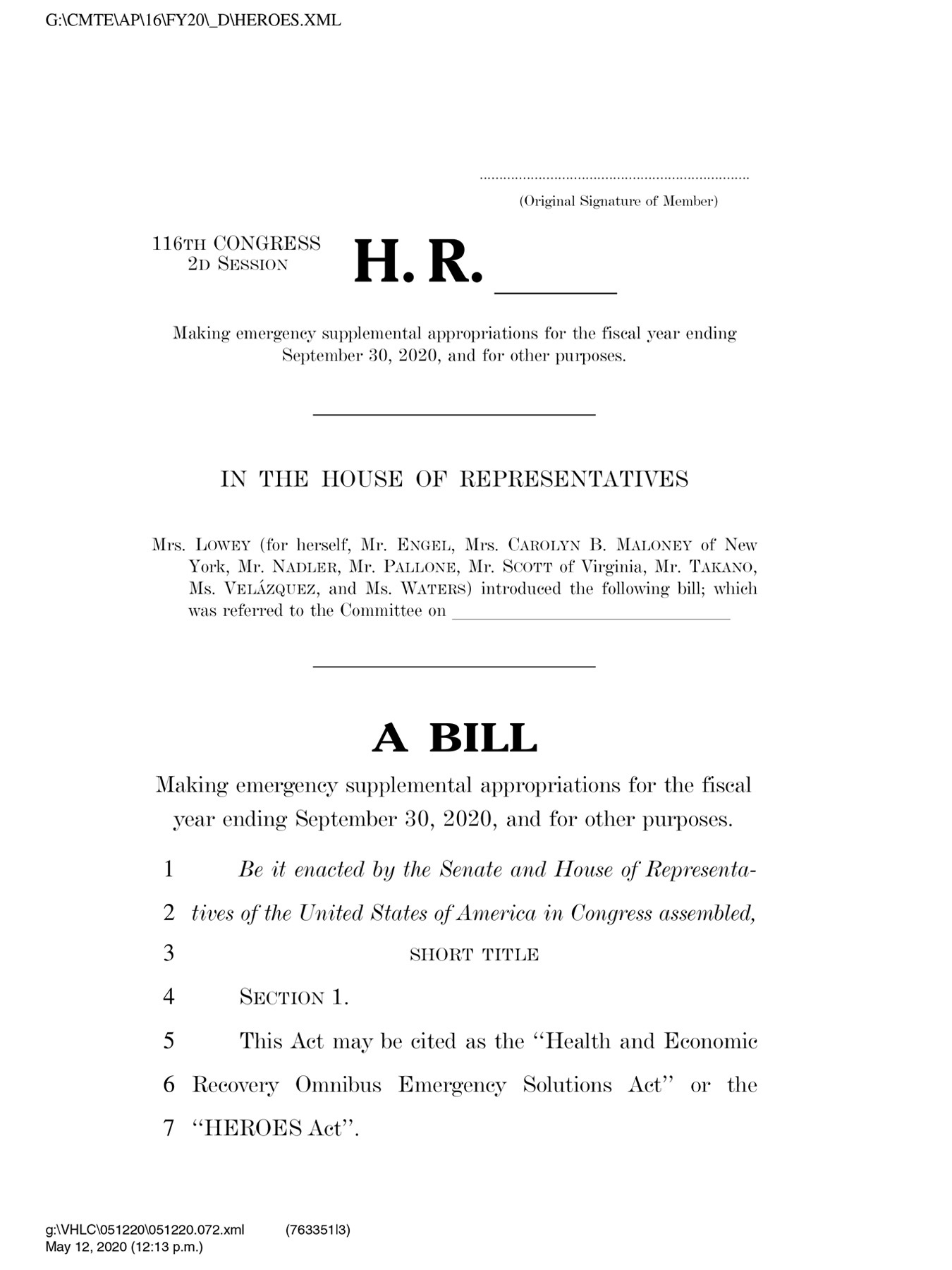 Leafly will continue to report and expand this article throughout the day.

Leafly Senior Editor Bruce Barcott oversees news, investigations, and feature projects. He is a Guggenheim Fellow and author of Weed the People: The Future of Legal Marijuana in America.