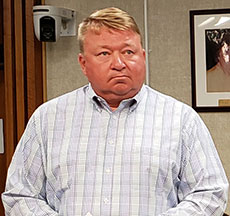 Haverhill’s Engineering Department opposes plans to site an adult-use marijuana store on Route 125 in Bradford because of traffic concerns.

The Haverhill City Council is being asked tonight to grant a special permit to locate the Frosty Nug at 1181 Boston Road, Haverhill, near the North Andover line. City Engineer John H. Pettis III, in comments on the proposal, said an additional 450 automobile trips per day, six-days-a-week is “a significant concern.” He said he raised similar objections to the proposed Dunkin’ shop at 915 S. Main St. “and those concerns have proven to be well-founded as there have been numerous accidents at the location, some very serious.”

Economic and Planning Director William Pillsbury Jr. also said a traffic study should place “heavy emphasis” on proposed solutions to additional Route 125 traffic created by the store. “This should include deceleration lanes and turning lanes on Route 125 in both directions,” Pillsbury said. He added the developer should show communication with the Massachusetts Department of Transportation which has authority over the highway.

During a public outreach meeting last June, the developer acknowledged heavy, peak-hour traffic. However, traffic consultant Scott Thornton of Vanasse & Associates, Andover, said traffic will still be less than other possible uses of the property.

The store would be open daily from 9 a.m.-9 p.m., except Sunday, when it will be open from 11 a.m.- 7 p.m. The developer said there will be 22 parking spaces for customers, while employees will park at satellite location.

City Environmental Health Technician Robert E. Moore Jr. also flagged wetlands during his department’s review. He said his office has no objections to the proposal, but the Conservation Commission’s approval is needed.

Besides the special permit from the City Council, what would be the city’s fifth recreational marijuana store also requires a host agreement negotiated with Mayor James J. Fiorentini and licensing from the state’s Cannabis Control Commission.

Haverhill city councilors are also expected to discuss trick or treat. The item was placed on the agenda by Councilor Mary Ellen Daly O’Brien. As WHAV reported earlier, Fiorentini originally said he expected the Halloween tradition to go forward. Police Chief Alan R. DeNaro, however, strongly recommended against the door-to-door practice in light of COVID-19.