Michigan became the latest state to allow recreational marijuana. From a Wisconsin perspective, we look at basic marijuana laws for the neighboring states of Michigan, Minnesota, Iowa and Illinois.

The Des Moines City Council will consider a resolution Monday that would be the first step toward decriminalizing marijuana in Iowa’s capital city and making enforcement of marijuana possession law enforcement’s lowest priority.

If approved, the order would create a six-person task force to study the issue and provide recommendations to the council by Oct. 1.

Even if the council decides to take action, it would not legalize marijuana, since city ordinances don’t trump state and federal laws. But it would instead tell police it’s not a priority to arrest people found in possession.

Amid conversations about the disproportionate impact of drug laws, however, advocates and council members said passage would be a first step toward change.

The issue was brought up during conversations around the city’s proposed ban on racial profiling, which will also be discussed Monday.

Iowa Citizens for Community Improvement and other community organizations have called for “making marijuana possession the lowest law enforcement priority” because Black people are more likely than white people to be arrested for possession, despite similar usage rates.

According to a 2020 ACLU report, Black Iowans are 7.3 times more likely to be arrested than white Iowans for possession of marijuana — the fifth-highest disparity in the nation.

“The ACLU advocates for the decriminalization of marijuana, but this a solid first step,” spokeswoman Veronica Fowler said Friday. “The (ACLU’s recent) study is solid statistical evidence that there is implicit bias in enforcing marijuana laws.”

The resolution, sponsored by four of the council’s six members, will be considered at the Des Moines City Council’s regular meeting at 4:30 p.m. Monday. Connie Boesen, Carl Voss and Joe Gatto are also sponsors, along with Mandelbaum . The meeting on Monday will held virtually because of the COVID-19 pandemic.

If approved, the assigned task force would be asked to recommend two things:

The council would only act if it would not result in police officers’ loss of accreditation by the state or result in a denial of state or federal funding, the resolution says.

To join the council’s Zoom meeting, click this link.

Mandelbaum said the city plans to act, even if the Iowa Legislature does not move to decriminalize the drug. He likened the potential “decriminalization” to the discretion law enforcement have over speeding regulations, saying police prioritize pulling over drivers only if they’re going more than 10 miles per hour over the speed limit.

“We make discretionary decisions all the time about how we enforce the law,” he said.

In Iowa, people charged with possession of marijuana for personal use can spend anywhere from six months to two years in jail and be fined up to $6,250, depending on how many times they’ve been charged.

Cities across the country have chosen to make marijuana possession the lowest law enforcement priority, even in states that haven’t decriminalized or legalized marijuana. The task force would be charged with looking at how other cities have made similar moves.

“We’re not on the cutting edge of this,” Mandelbaum said. 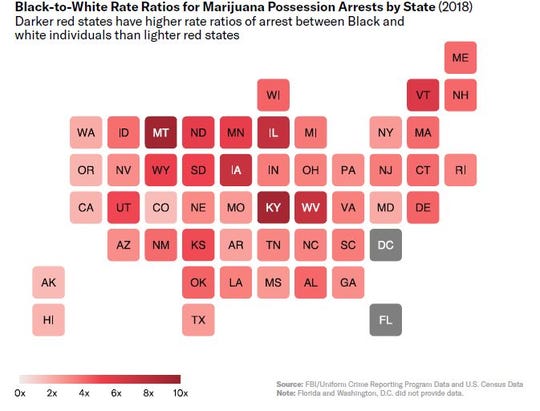 “As with any legislative process, we will participate as is appropriate and continue to provide the best service to our citizens,” said Sgt. Paul Parizek, spokesman for the Des Moines Police Department.

The city council has already selected Gary Dickey Jr. to serve on the task force as the attorney with criminal defense experience and Billy Weathers, who has organized and led local protests in recent weeks, as the community member.

“I hope that any brother, sister, any human, any Black woman or Black male sitting in jail or prison on a marijuana-related offense has a chance to get their records expunged,” said Weathers, 29. “… I hope our government stops spending money on petty offenses and starts focusing and allocating funds to real problems that we can fix. Things that matter.”

A majority of Iowans have shown support for legalizing marijuana for recreational use, according to a Des Moines Register/Mediacom Iowa Poll conducted in March. More than half (53%) of Iowans supported recreational marijuana, up from 29% when the same question was asked in February 2013.

Why did Philadelphia see such a steep decline, while Pittsburgh didn’t?

“It all comes down to law enforcement buy-in,” said Patrick Nightingale, executive director of the Pittsburgh chapter of the National Organization of the Reform of Marijuana Laws.

Nightingale said even though the ordinances are the same, the police departments chose to enforce them differently. Specifically, he said the Pittsburgh police chief told his officers in a memo that they “may” follow the ordinance, but did not say they “shall” follow it.

“I asked them to use the word ‘shall,’” Nightingale said, “and police leadership would not do that because they were concerned that it would cause a rift with the Fraternal Order of Police.” As a result, he said, 75 to 80% of marijuana possession cases result in a misdemeanor charge, rather than a citation.

As the Des Moines city council looks ahead toward potentially drafting its own decriminalization ordinance, Nightingale says buy-in from law enforcement is essential.

“You really want to have a good conversation with law enforcement leadership,” he said, since officers are the ones expected to change their behavior and attitude about how to enforce low-level marijuana crimes.

Kim Norvell covers growth and development for the Register. Reach her at knorvell@dmreg.com or 515-284-8259. Follow her on Twitter @KimNorvellDMR.