DEXTER — To help determine what the direction the town should go in terms of permitting marijuana-related businesses or not, the Dexter Town Council approved a pair of referendum questions for the November ballot during an Aug. 13 meeting.

DEXTER — To help determine what the direction the town should go in terms of permitting marijuana-related businesses or not, the Dexter Town Council approved a pair of referendum questions for the November ballot during an Aug. 13 meeting.

“I just want to say how simplistically this is written, it shouldn’t go wrong,” Councilor David Palmer said. “It will give us a feeling of how they feel today.” 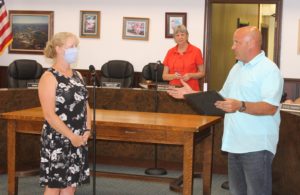 Town officials said they anticipate a very high turnout for the presidential election, perhaps double the 684 ballots cast (about 30 percent of registered voters) in last month’s primary. The referendum question results will be taken into consideration by the council in the decision-making process after early November.

In other business, the council approved the creation of a memorial garden for long-time Councilor Sharon Grant by the Miller House on the Dexter Historical Society’s Grist Mill Museum Campus.

The council also gave the go-ahead to Kyle Lemieux, a 2007 graduate of Dexter Regional High School and the Tri-County Technical Center (TCTC) who is general manager of Outta The Ordinary Restaurant in Old Town, to proceed with working on the restaurant space at the municipal golf course. The lease will be reworked in the near future.

Town Manager Trampas King explained the plan is for the new Dexter establishment to serve pizza and sandwiches for golfers and with year-round delivery and takeout for everyone else.

Lemieux said the kitchen area would be rebuilt, and he mentioned working with TCTC culinary students as a possibility.

“Every time we can encourage a business in town, I am 100 percent behind it,” Palmer said.

King asked the council to be thinking of the Reddy Building at 51 High Street, which once was Plummer Memorial Hospital. He said Dr. Challa Reddy is looking to do something with the property, having hoped to have given it to Northern Light Health.

“I think he wants to get away from it but I think he would hold on a little longer if we were going to do something with it,” King said.

“I don’t think the school is out of it yet,” he said about another possible recipient of the Reddy Building. “I just want you guys to be thinking of us.”

“I live on that street and I want it to be taken care of and not turned into an eyesore,” Palmer said.

When asked, King said operational costs are about $40,000 annually which he said is why he is hesitant for the building to be turned over to the town. The town manager said property taxes are $3,000-plus per year.

Councilor Andrew Bermudez mentioned that should the building be donated, Dr. Reddy would like his surname renamed as part of the name.

Speaking about the COVID-19 pandemic In his report King said, “I would like to say things are getting better, but they are not,” referencing three recent cases just to the north in Dover-Foxcroft. “Everybody being out there be aware of others and be aware of yourself.”

He said for Dexter and the surrounding communities school-related resources are available at www.aos.94/covid. The town manager said students will be heading back to school in early September. He said an announcement was recently made that week the middle school fall sports season at the Ridge View Community School was canceled.

King also said the postponed Fourth of July fireworks will be held on the evening of Saturday, Sept. 5. He said the specific starting time will be posted on the Dexter Maine Facebook page leading up to Sept. 5.