With all precincts reporting, the proposal received a 55% yes vote.

Bernadette King was among the Ecorse residents who voted for the measure.

“Marijuana is already everywhere anyway,” she said. “It’s eventually going to be just as common as cigarettes, so why not have it here?” 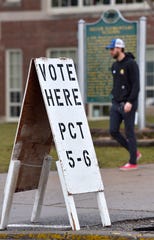 “I’ve never smoked marijuana, and it seems to me we have enough problems with alcohol, and I don’t want any extra problems in Ecorse,” he said.

City officials will have to come up with rules governing dispensaries, Ecorse city clerk Dana Hughes said before the election.

Voters in other Wayne County communities voted on issues as well, including:

Allen Park Public Schools: Voters approved a proposal to restore the district’s ability to levy the statutory limit of 18 mills for three years on all property except principal residences. The district said it has lost $189,000 because of the Headlee rollback over the last two years.

Crestwood School District (Dearborn Heights): A proposal to restore the district’s ability to levy the statutory limit of 18 mills for 15 years on all property except principal residences. The tax was leading in initial returns.

Grosse Ile Township: Voters by a 2-to-1 margin approved levying 1 mill for five years to be used to make infrastructure improvements and repairs to school district facilities; to purchase real estate; for construction or repair of school buildings; for school security improvements; or for the acquisition or upgrading of technology. The proposal included a 0.75-mill renewal and a 0.25-mill increase and will provide an estimated $627,500 in the first year.

Plymouth-Canton Community Schools: Voters were deciding whether to allow the district to borrow up to $275 million over 20 years and issue general obligation tax bonds, to pay for remodeling, equipping and furnishing school buildings, the performing arts center, athletic fields, playgrounds and other facilities; erecting a new stadium, and maintenance/storage facility for school athletics; and other structural improvements. The district says the issue would not require a tax increase. In initial returns, about three-quarters of voters were in favor of the issue.