EDMORE — This village is one step closer to welcoming its first marijuana businesses after the Edmore Planning Commission approved two special land use permits applications on March 9. 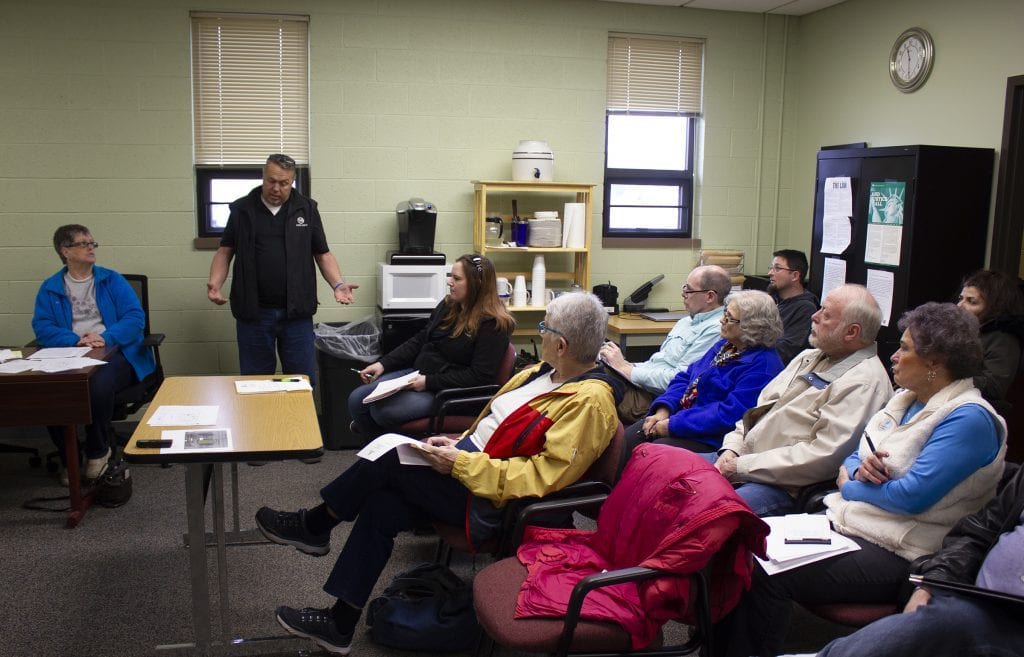 Greg Mackey, founder and president of Agric-Med, talks to members of the Edmore Planning Commission on March 9 about the retail marijuana shop he hopes to open at 202 E. Main St. — DN Photo | Karen Bota

Village Manager Justin Lakamper told commissioners that the permit for 413 E. Main St., which is zoned B-1, would allow any retail uses for medical or recreational marijuana, including a micro business, retail center or provisioning center. The owner of the building, Travis Jensen, applied for all three types of permits, although ultimately only one use will be allowed in that space.

However, just because the permit was approved doesn’t mean a marijuana-related business will necessarily open there.

“This is just for the use of the building,” Lakamper told commissioners. “You could grant this to that building and it could never have a license attached to it.”

Securing a special land use permit for the property is the first step in the licensing process, said Lakamper, “so whoever applies later (for a license) would have to say the building I own or am under contract for has been approved by the Planning Commission to be used for this.”

A buyer could re-open the restaurant or use the site for any other B-1 approved uses, Lakamper said.

Jensen told the Planning Commission he doesn’t have a buyer for his building yet.

“We’re applying for (the permit) because I found this to be the best opportunity to sell my building,” he said.

The potential buyer for the property at 202 E. Main St., also zoned B-1, applied for the permit for the same retail special uses as those proposed for the former Phenix property. In the site plan, he has additional parking space to meet village requirements, Lakamper said.

Greg Mackey, founder and president of Agric-Med, which has opened medical and recreational marijuana shops in Muskegon and Nunica, is hoping to open the same in Edmore in the former garden shop space. Mackey began his marijuana business three years ago and told commissioners he was ninth in the line of the 26,000 people applying to the State of Michigan in the initial licensing process. His two stores have been open for nine months and seven months, respectively, and are “well-run, tight ships,” he said.

“We have had no issues. The state loves us,” Mackey said. “We will be open very fast (in Edmore), very efficient, very clean, with secure rooms with a lot of security cameras. I think you’ll like us. I think we’re a good asset to the community.”

Mackey said he plans to hire eight people locally to work in his store.

During public comment on the matter, David Elwood, who said he has opened marijuana businesses across the state and the country, encouraged the Planning Commission to think through which properties are better suited for which retail business. Of the two applying for special land use permits, only one would be allowed as a retail center, per the village’s marijuana ordinance.

“If one is approved for retail, that leaves the other for a micro-business, which is a grow spot. In floor planning, think through which building or what areas would have cultivation,” Elwood said, adding that micro-businesses grow plants and then sell those plants. “I’m a member of my own zoning board and planning commission, and we didn’t think it through.”

“If you said ‘unlimited’ and you became known as ‘The Weed Village,’ that’s different,” he said. “It’s no different than a drug store, the more socially accepted it becomes. Or on the recreational basis, no different from a liquor store. … The only time it would affect it is if you back up to a property, and you have the smell going on.”

Planning Commissioner Karen Nesbitt noted that Edmore is an agricultural community and ag communities all have a smell.

“It’s a part of doing business,” she said.

Planning Commission Chairman Chris Miller agreed. At the moment, how marijuana businesses will impact Edmore is an unknown, but he believes that ultimately everyone wants what is best for the village.

“I’m optimistic, I’m hopeful we’re making the right decision. I think if we don’t approve, then we’re in danger of … going backward,” Miller said. “A lot of us were born and raised here. Even though some don’t live in the village, we’re Edmore people … so hang with us.”

The Planning Commission also voted to recommend to the Edmore Village Council approval of a variance request for a 5-acre parcel located at 1398 Industrial Drive to be used as R-2 rather than industrial.