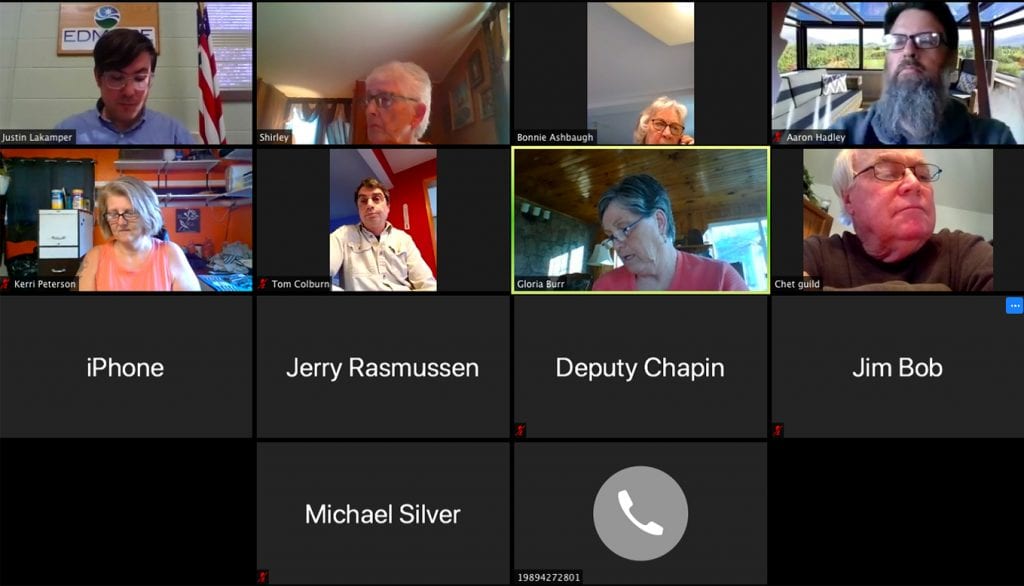 Edmore Village Council members and staff meet via Zoom on Monday night to discuss business items that included approval of a license for a marijuana business and an increase to water and sewer rates. — DN Photo | Karen Bota

EDMORE — Another marijuana business is on track to open in downtown Edmore after Village Council members approved a recreational retailer and medical provisioning center business licenses for Pinnacle Emporium.

Council members met via Zoom on Monday night due to the continued stay-at-home order by Gov. Gretchen Whitmer.

Village Manager Justin Lakamper said the application requests that the business be opened in the old bar section of the former Phenix Restaurant.

Pinnacle Emporium has a store in Morenci and has been approved for retail and provisioning licenses in Coleman as well, according to Lakamper. Additional locations are planned in Addison and Camden.

The Village Council approved granting the licenses by a roll call vote of 7-0. The approval stipulated that the business must be on a separate water meter before opening. There currently are two water meters in place for the three spaces in the Phenix building.

Pinnacle Emporium must have licenses from Edmore and a license from the state to open.

The Village Council voted in April to amend two of the village’s marijuana ordinances to allow additional marijuana businesses after Lakamper told them that individuals interested in opening a new business in Edmore want both the retail and provisioning center licenses.

“We’re excited to be part of the Edmore community,” Silver said.

Village Council President Gloria Burr welcomed him to the community and said she looked forward to working with him.

“It’ll be nice to have you in town,” she added.

Also on Monday, the Village Council approved a 2.1 percent increase to village water and sewer rates.

A resolution passed in 2008 automatically raised water rates and sewer rates by 2.1 percent, based on the Consumer Price Index (CPI). Lakamper had suggested a 6 percent hike this year on water only, because of changes to the Michigan Lead and Copper Rule and infrastructure work that is mandated over the next five years.

The proposed 6 percent bump, which would have been inclusive of the 2.1 percent CPI, would “moderately increase” the village’s fund balance, according to Lakamper. At 6 percent, the cost to residents would have been $1.53 per month, versus 54 cents per month at 2.1 percent.

The sewer increase at 2.1 percent is 72 cents per month.

“I don’t think we can take a chance on running any shorter, when we’ve got some major things that are going to happen,” Drain said. “It kind of scares me when they talk about small governments are going to need help (because of the economic impact of the coronavirus pandemic). I’d kind of like to stay on top of this if we can, if we don’t feel we’re hurting our people too much. All of us have to pay it too.”

Burr reminded council members that they raised the water rates by 8.4 percent last June to address upcoming infrastructure needs and to avoid raising rates again this year, above the 2.1 percent CPI increase.

Drain was concerned that if any businesses closed, water revenue will be reduced. Burr noted that the two marijuana businesses approved last month and this month will provide additional revenue.

The motion to raise water and sewer rates by 2.1 percent passed 7-0.