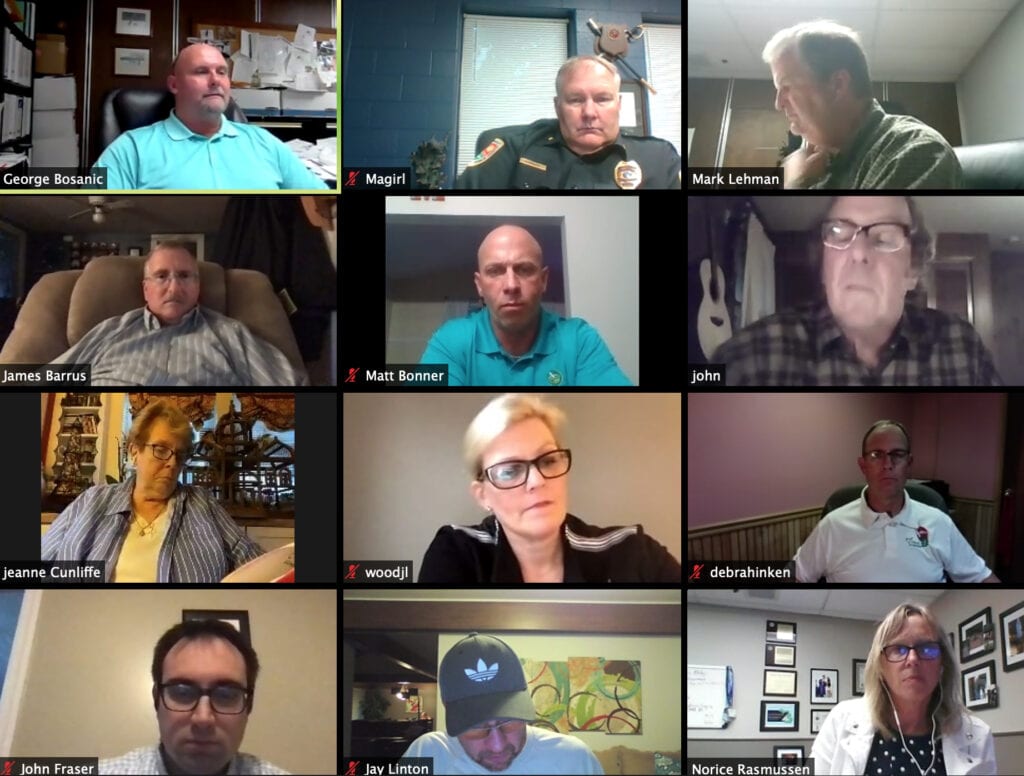 GREENVILLE — With multiple factories and businesses long established in this community, ranging from manufacturing, health care, retail and more, could another form of industry — marijuana — now be on its way as well?

That’s the discussion that came forward during Tuesday evening’s Greenville City Council meeting during a presentation on options to consider regarding the sale of marijuana in the city.

The presentation served as the first step in a direction toward allowing any sale of marijuana in a community that currently prohibits it.

In 2008, the Michigan Compassionate Care Initiative was approved by Michigan voters, which legalized the use of medical marijuana in the state, but did not explicitly allow dispensaries to operate. Locally in Greenville, 62% of voters voted in favor of the legislation.

In order for any of those operations to operate legally, a community must first “opt in” to the legislation, an action Greenville has yet to do.

Additionally, the Michigan Regulation and Taxation of Marihuana Act was passed by voters in November of 2018. In Greenville, 58% voted in favor of the legislation. 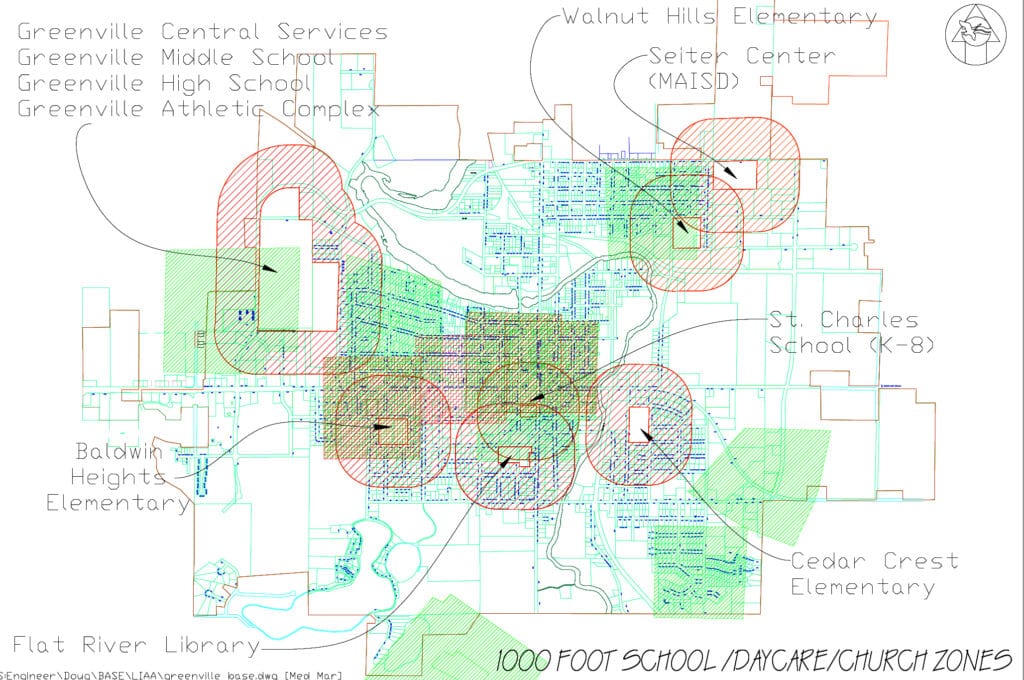 A map created by Greenville City Engineer Doug Hinken shows what areas of the city would be off limits (red circles and squares) for marijuana retailers and facilities due to being located within 1,000 feet of a school, church or day care, if they were to be permitted in the city of Greenville. — Submitted graphic

However, the City Council voted in January 2019 to opt out of allowing the sale of marijuana in the city, as was permitted per the act.

“By the City Council opting out right now, we’re not saying ‘no,’ what we’re saying is ‘no for now,’” City Manager George Bosanic said at the time. “Then later, when we have all the information from the state, it can be decided on. If that (decision process) is taken negatively, that’s unfortunate.”

Since that time, Matt Bonner and Shawnee Lenon, owners of the Green Medicine Shop CBD retail store, which opened this past February, have requested the City Council revisit its decision to prohibit the sale of marijuana as they are already pre-qualified by the state for a medical cannabis license.

“Our mission is to promote community health and wellness by providing both of those services here in Greenville — safe access and education on medical marijuana,” said Lenon when the owners first approached the council in October 2019. “If the ordinances in the city of Greenville were more in line with public opinion — 60% in favor of legalization — then we could also offer that here in Greenville. This would both bring new business and provide safe access to consumers, instead of having them drive to Lansing or Grand Rapids for their prescribed medication.”

Since that time, the council has not revisited the issue, and in March, Bonner pleaded with the council that it begin discussing the topic as an agenda item during its meetings.

“The folks of Greenville want this. They want to see a provisioning center,” Bonner said. “They want a place for safe access to the medicine. It’s becoming more used for chronic pain, rather than just recreational use.”

Now a year and a half out since first opting out of the sale of marijuana, Bosanic said, in reaching out to the Dickinson Wright law firm for legal counsel, he was prepared to present information to the council to evaluate.

Medical, recreational or both?

If the council wants to consider opting in with the passage of an ordinance to allow private businesses to sell marijuana, Bosanic said it will have to decide whether to allow the sale of medical, recreational or both.

“There seems to be no clear path from what other municipalities have done thus far,” Bosanic said. “Those that have chosen the medical option seem to have done so for the purpose of aiding the medical community in the effort to assist those who may need it for medical purposes. Others have opted to forego the medical route, but rather to open it up to for recreational sales. Still, others have chosen both. There seems to be no rhyme or reason but for local preference.”

The council would also have its choice on what type of businesses to allow, ranging from growers, processors, retailers, provisioning centers, secure transporters, safety compliance facilities and special licenses, and could decide where they may specifically operate throughout the city’s various zoning districts.

Bosanic said be it through either a special land use request, as would be required with retailers, or permitted in industrial zoning, the Greenville Planning Commission would have to grant such requests and amend current zoning laws first before these types of facilities are permitted in the city.

Additionally, Bosanic said the council would have to discuss issues that have come forward in other communities, including locating dispensaries a certain distance from schools, libraries and daycare facilities — possibly by 1,000 feet — as well as requiring that they be located in specific zoning districts, such as commercial and industrial.

“Most cities seem to exclude downtown districts and some set limits for zones within other commercial districts,” he said. “If the council is inclined to consider allowing retailers, it should discuss whether certain commercial areas are restricted such as downtowns and/or other commercial zones or areas within certain zones.”

The council will also have the option to decide how many such businesses and facilities they want to allow in the community; however, Bosanic warned this could lead to “legal challenges,” if the city were to find itself with more applicants than facilities deemed allowed.

Attorney Jessica Wood of Dickinson Wright has helped draft marijuana ordinances for cities including Lowell and Grand Rapids, and she said an approach of “natural selection” as used in Lowell may be best when determining the number of applicants and where they can be located.

“Lowell allows recreational dispensaries in certain areas, but once those locations run out, they are done,” she said. “There’s no cap per se on the number of licenses to be issued, but they can tell looking at the map there’s going to be a limited number because there are only so many parcels that will meet the requirements. It’s simple and it worked really well for them.”

By allowing the sale of medical and/or recreational marijuana, the city would be the beneficiary of additional tax revenues it is not currently collecting.

The various taxing authorities would also benefit from any investment made to personal property in approved zones directly related to the businesses locating within approved zones.

With the sale of recreational marijuana, 15% of collected taxes on the product are distributed to cities, townships or villages that allow recreational business — which would then include Greenville — proportioned based on the number of businesses and retailers.

But Bosanic stressed that with those benefits to the city could come consequences, such as robberies of dispensaries, as has occurred in Grand Rapids.

“If an ordinance is approved, this type of criminal activity will likely increase as all communities have a certain level of ‘riff-raff,’ or in this case, ‘reefer-riff-raff,’ that will most certainly be tempted to engage in criminal activity,” he said. “This will cause an additional burden on law enforcement to patrol, respond, investigate, and prosecute any offenders.”

Councilman Larry Moss, who has long spoken in favor of allowing the sale of marijuana in Greenville, said he was hopeful the City Council could pursue adopting ordinances as early as October.

Bosanic recommended the council consider it being an action item at the Oct. 20 meeting, not to adopt ordinances, but to consider whether or not to move forward with an ordinance. He stressed that the council should wait until that meeting, as Councilman Jeff Scoby was absent Tuesday and the council will be appointing a new council member during its Oct. 6 meeting to fill the vacancy of Mayor John Hoppough, whose last day in office will be Sept. 23 following his resignation.

“They will need to be brought up to speed as well on what you’ve learned today also,” Bosanic said.

Bosanic said if at that time the council decides to move forward with an ordinance to allow the sale of marijuana, it could begin outlining any parameters it would wish for the Planning Commission to consider upon drafting ordinances and possibly scheduling a joint meeting.

Moss said he was fine with waiting until Oct. 20.

“We probably have much to discuss before we make any decisions. I just want to see the conversation continue to move forward,” he said.

Bosanic said his intention is not to delay any future ordinances from passing but to ensure they are right for the city.

“I just want to make sure that we do it the best possible way because a lot of this stuff is new and there’s a lot to it. If anything happens, I want to be able to look back and say ‘we did it right,’” he said.