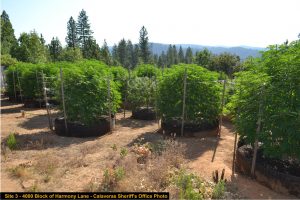 According to Calaveras County Sheriff’s spokesperson Sgt. Greg Stark, last week’s raids included services of search warrants Tuesday in the 7000-block of Goodell Road in Paloma, where the Marijuana Enforcement Team (MET) seized over a hundred marijuana plants with an estimated value exceeding $74,000.

He adds that while no suspects were located at the site, the investigation is ongoing. That same day, the team searched a property at the request of an individual who had discovered a cultivation site on his property.

That site, located in the 9000-block of East Murray Creek Road, is where deputies discovered that suspects had trespassed onto the parcel to prepare a cultivation area and had routed a water line onto the property for irrigating the intended grow. Stark says it was obvious the suspects had planned to place the marijuana plants amongst trees to make them less visible and that evidence collected at the scene is being used in an ongoing investigation.

At the first location, deputies seized over 260 plants and over three pounds of processed marijuana which investigators estimated carrying a total street value of over $183,000.

On the second site, the team seized nearly 70 plants, one gram of methamphetamine, and drug paraphernalia and one firearm. Investigators estimate the value of eradicated marijuana to exceed $60,000. While one suspect fled the scene, he was located and placed under arrest.

At the third location, where deputies eradicated more than 80 plants and over 73 pounds of processed marijuana exceeding an estimated street value of $83,000, they also seized a firearm and arrested two suspects.

Cheng Vue, 50, and Jason Vue, 26, both of Sacramento, were each booked on charges of illegal marijuana cultivation and assigned $50,000 bails.