With the stroke of a pen, Governor Northam signed legislation to legalize personal cultivation of marijuana in Virginia as of July 1, 2021. Now, not in 2024.

On July 1, adults 21 and older will be legally permitted to grow up to four plants per household for personal use.

OK, so where can Virginians go to purchase pot seeds or clones? Legally?

“No. There’s no way to buy it legally,” Pedini stated emphatically. “Unfortunately what Virginia failed to do in this piece of legislation is follow the same common sense pathway that states that have gone before us have done.”

What have other states done?

States regulate a pathway for adult consumers to shop at medical cannabis dispensaries. Until Virginia implements this, there will be no legal way for adults to obtain seeds or clones until adult-use retail cannabis locations are opened — potentially, in 2024, Pedini explained. 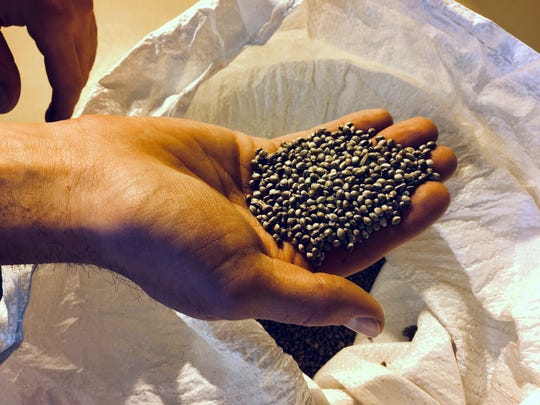 Acquiring marijuana seeds or clone plants is a major issue for would-be homegrowers in Missouri or elsewhere. In this Feb. 14, 2019 photo, a professor at the State University of New York in Morrisville displays some cannabis seeds. (Photo: Mary Esch, AP)

Nothing is being done by this administration to resolve this, Pedini added.

The Virginia Board of Pharmacy cannot do anything about it through regulatory measures. The only way to fix this is through legislation.

Virginia legislators approved a medical cannabis program and have actively chosen to maintain it, Pedini said.

“At some point, legalization has to be about Virginians. While there should absolutely be a focus on creating an equitable industry and one that prioritizes equal opportunity by those harmed by marijuana prohibition, that is not the only objective of legalization.”

This is the program legislators have saddled with Virginians, said Pedini. “Now, how can you make this program for Virginians? It can’t only be about how to make a buck on the backs of consumers.”

Not just consumers but Virginia as a whole. With regulations comes public safety, Pedini emphasized.

Solution to this problem?

“That same majority is not demonstrated in the legislature. Politics takes a front seat and policy takes a back seat.”

Your support allows us to keep doing stories like this. Subscribe to us at newsleader.com and join our USA TODAY Network family.

It was unfair to say the current legislation passed was altruistic by the administration, Pedini said. It left out thousands of concerns by its constituents; 9,000 of those people contacted NORML asking what they could do to fix this.

“Ultimately, there was a big push by Virginians to say you need to stop the harm now. Decriminalization as long warned was never going to be a solution. Data has shown it did nothing to reduce the disproportionate laws that affect Black and white Virginians.”

It’s almost laughable, Pedini said. If people already had access to cannabis, the harm of marijuana prohibition is stopped.

When a state enacts marijuana legalization, typically it establishes a pathway through which it can rapidly license adult sales.

“Most states have a large robust medical cannabis program. When you think about it in this context, it’s even more laughable because there’s only four of them.”

Currently, Virginia has four operational medical cannabis facilities in the state. The health region that serves the Shenandoah Valley remains tied up in a lawsuit between a cannabis company that lost its conditional license and the Board of Pharmacy.

Most states that have legalized adult-use began with medical cannabis programs first.

“I don’t think anyone has taken three years to expand from medical to adult-use. It’s the standard practice: OK, we have dispensaries, now these dispensaries can sell to adults via regulations.”

The four medical cannabis dispensaries now open are the only places that “could” sell pot seeds and clones to Virginians legally.

This would not only allow consumers to make a legal purchase, it also allows them to grow the “four pot plants” allowed.

“And that’s Virginia,” said Pedini. “What are you guarding against? You are only creating protections for the illicit Virginia operators.”

If the four (someday five) medical cannabis dispensaries can sell both medical and adult-use cannabis, it reduces illicit market activity.

The marijuana legislation also included a new agency, the Virginia Cannabis Control Authority, to oversee the establishment of regulations that will govern the adult-use market and determine cannabis policy in the Commonwealth.

What can Virginians do?

In the meantime, if Virginians can’t purchase anything legally in Virginia, can they get marijuana plants from outside the state and bring them in?

“It is illegal to transport any cannabis across any state lines,” answered Pedini.

If Virginians are cultivating those plants now or in the future for personal use, is that illegal?

“Now, yes, personal cultivation is illegal. After July 1, if they are 21 and up, then it is legal.”

If they buy pot out of state and bring it in state to roll/smoke, is that illegal?

“It is illegal to transport any cannabis across any state lines.”

So what exactly can Virginians do?

“Dispensaries are already open and they’re not allowed to shop there.”

Read: Yes, you can sit at the bar now in Virginia. New COVID guidelines in effect.

Monique Calello (she/her) is The News Leader’s health reporter. Story ideas? I want to hear them. Please email me at mcalello@newsleader.com. Follow me on Twitter @moniquecalello.