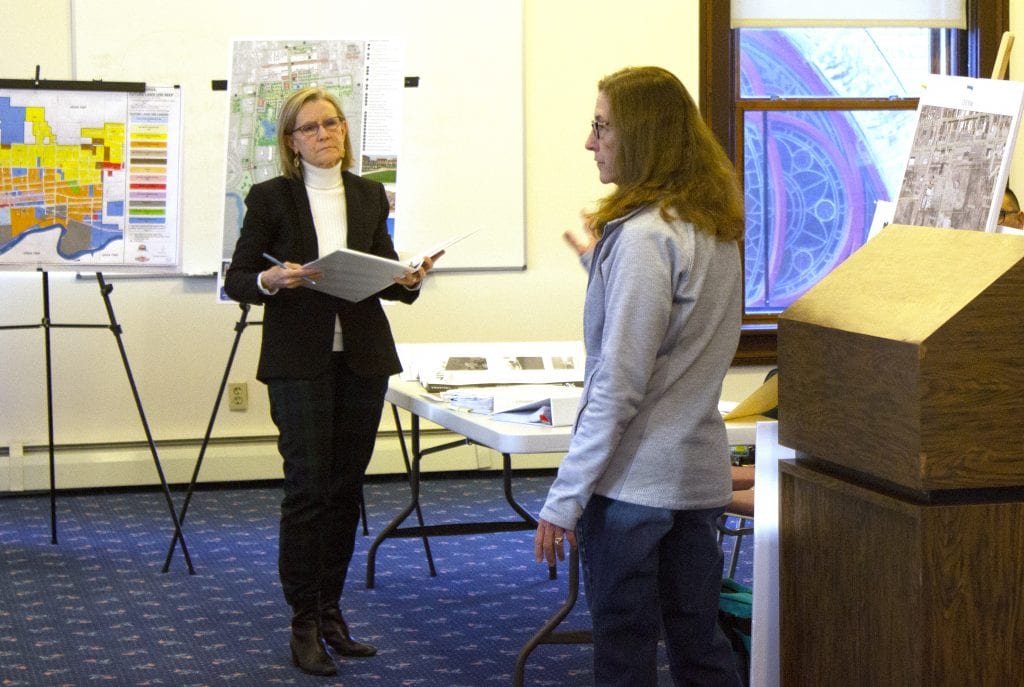 Ionia resident Jani Millard, right, addresses the Ionia Planning Commission on Wednesday in support of a special land use permit for a medical marijuana provisioning center at 300 S. Steele St., while the city’s planning consultant, Jan Johnson, listens. The Planning Commission denied the permit by a vote of 3-3. — DN Photo | Karen Bota

But at least a decision has finally been made, he said.

PRW Ventures was interested in purchasing the building Sanford owns at 300 S. Steele St. for a medical marijuana provisioning center. The city’s medical marijuana ordinance requires that a special land use permit be obtained before a site plan can be reviewed and approved.

The Ionia Planning Commission on Wednesday voted 3-3 on a motion to deny the request for the permit, and then again to approve it. Ionia City Manager Jason Eppler said a tie meant the permit was denied.

The Planning Commission had tabled the request last November after a public hearing on the matter and extended discussion. The request remained tabled at last December’s meeting because a PRW Ventures representative couldn’t attend.

“In some ways, it’s a relief because I can get on with it,” said Sanford.

The Steele Street Corridor is a sub-area of the city’s 2019 Master Plan, adopted in October last year. According to Eppler, because it is zoned commercial and doesn’t include churches, schools and parks — which require buffer zones between them and provisioning centers — the corridor is one of the few areas in the city where such facilities may be considered by the Planning Commission.

But whether the use is deemed consistent with the city’s master plan is another question, and that was the one before the Planning Commission at January’s meeting when the discussion started all over again.

Resident Jani Millard told the Planning Commission that language in the master plan states that “the design principles are also intended to allow a degree of flexibility to accommodate market trends and alternative development proposals.” 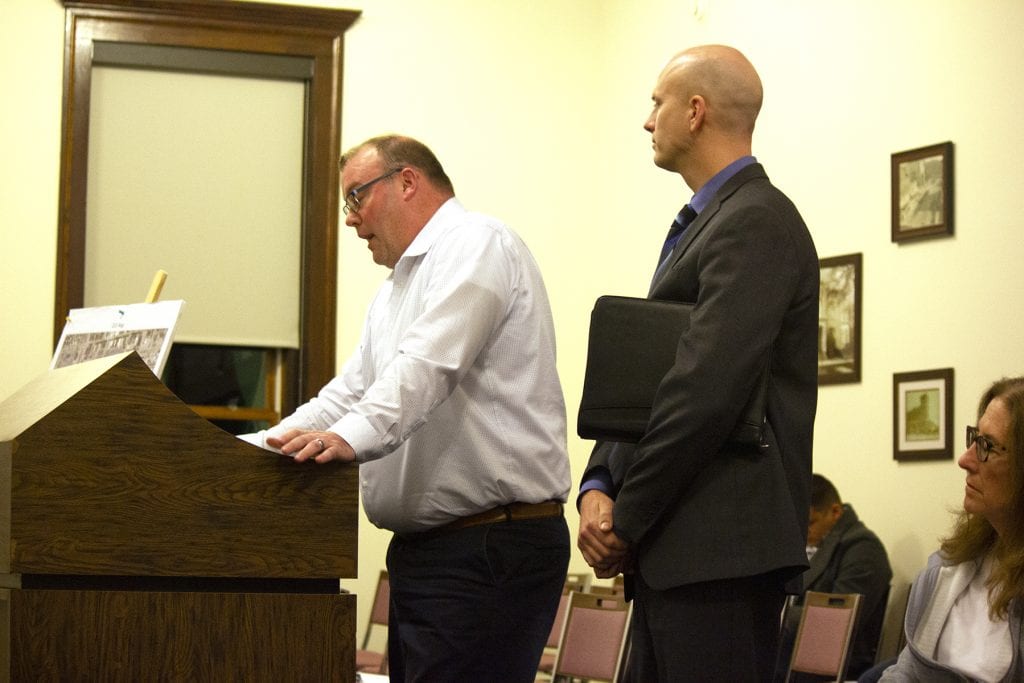 “I know that the hold-up relative to this approval has to do with what the intended use is for the property, and putting all moral judgments aside … I think it is grossly unfair to the existing property owner there to not allow for some flexibility that allows a plan to enable the sale of his property,” Millard said.

While the city’s planning consultant Jan Johnson has stated that in her view the proposed provisioning center at 300 S. Steele St. is not consistent with the plan for the Steele Street Corridor, Realtor John Dinehar said he has “poured over” the zoning ordinance and the city’s plans for the area and found nothing that said medical marijuana was prohibited there.

There’s a certain “stigma” that comes with marijuana, Dinehart said, mentioning a word that has been used during past discussions by the Planning Commission.

“With marijuana legal in the state of Michigan … marijuana is here. We can’t live in a bubble, and who are we harming in this?” he asked. “We’ve got a buyer wanting to invest over a million dollars into this building, into our community. … We get a new business coming in and we get an existing business (Steele Street Brewing) relocating to a new building.”

She noted that the Planning Commission already denied another special land use permit for a medical marijuana provisioning center 170 feet to the north of 300 S. Steele St.

“You do have a record of denying an application in the Steele Street Corridor,” she said. “Being consistent is important.”

Planning Commissioner Ted Paton said he had “thought long and hard” about the request and was leaning toward not approving it. Chairman Boomer Hoppough voiced concern about “that creep northerly” should they approve another marijuana business in the area. 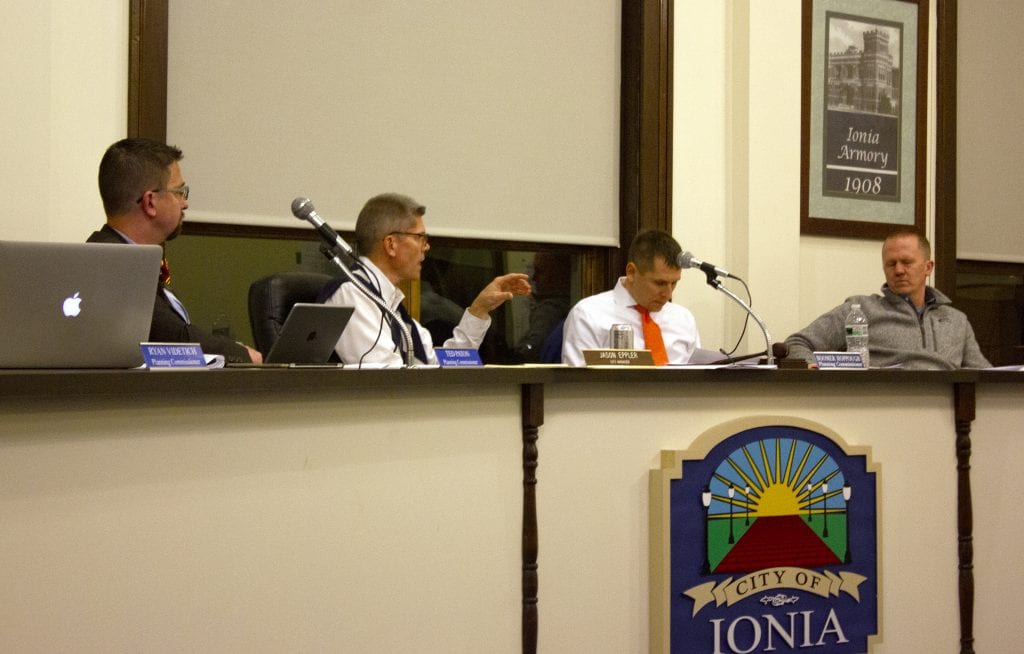 On the other side, Planning Commissioner Dave Cook said he couldn’t “in good conscience” deny the application “because arbitrarily a few years ago we set that zoning line” (for the Steele Street Corridor).

Planning Commissioner Judy Swartz wondered aloud how much of the struggle with the special land use permit approval had to do with it being for a marijuana business.

“If … they were coming to us to put a brewery in there, would it be harmonious with the Steele Street Corridor? Would we have had a problem?” Swartz asked. “Because alcohol has been around for so long and marijuana is a new thing, we don’t know how it’s going to go. I’m trying to measure how much that is impacting us.”

New Planning Commission member Ryan Videtich, who was appointed just the night before the meeting, admitted to being at a disadvantage, not having been in on previous discussions. However, he also read the master plan as having a degree of flexibility to address market trends like marijuana.

After a long discussion, Planning Commission members voted on whether the first of five standards was met before continuing to the other four. All five standards must be met to issue a special land use permit.

Two votes were taken. Hoppough, Paton and Tim Lee voted in favor of a motion that the proposed use did not meet the first standard; while Cook, Swartz and Videtich voted against.

In a second motion that flipped the first, Cook, Swartz and Videtich voted that the use did meet the first standard, while Hoppough, Paton and Lee voted against.

Before moving to adjourn the meeting, Videtich called the decision “very, very subjective.”

“I would just say it’s an interpretation based on an individual reading,” Videtich insisted.