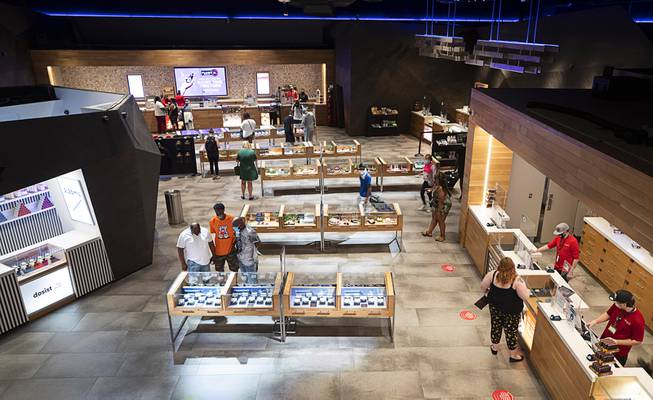 During the pandemic, the Planet 13 dispensary on West Desert Inn Road has shifted its primary focus from tourists to Las Vegas locals.

Before the coronavirus pandemic, the two Curaleaf-owned dispensaries in Las Vegas didn’t focus much on delivery.

Since COVID-19, however, that’s all changed. Today, Curaleaf is making about 1,000 deliveries a month in Las Vegas.

It’s an example of how the marijuana industry has had to change on the fly in a time filled with challenges nobody would have predicted, Russ said.

“It’s been a rocky road, although we continue to see improvement month over month in our stores and in our wholesale business in Nevada,” Russ said.

Though dispensaries were forced to temporarily close in the spring at the outset of the coronavirus crisis, the industry in Southern Nevada has come back strong.

According to the Nevada Department of Taxation, $76.7 million was spent on recreational and medical cannabis products in September. That’s up almost $20 million from September 2019, before the pandemic.

“Our delivery has really expanded,” Russ said. “We’re delivering all the way to Summerlin and Henderson now. We probably should have been doing some of these things before the pandemic, but we’re doing them now. Some of the changes have allowed us to grow sequentially, and I’m really proud of that.”

Brandon Wiegand, regional general manager for The Source and its two Las Vegas dispensary locations, stopped short of saying that the industry is back to normal. But things are headed in the right direction, he said.

“I’ve been saying that we’re crawling back to normal,” said Wiegand, a board member of the Nevada Dispensary Association. “I know some operators have seen an increase in business and, overall, the market has seen some growth. There’s been some new dispensaries opening, too, which has helped with that. I think most of us are feeling better than we were in April and May.”

The low point for the industry came in April, when Nevada recorded about $42 million in recreational and medical marijuana sales.

“Overall, we’re about even with where we were last year,” Wiegand said. “That said, it’s been challenging. Business is very different. Customer behavior has changed. We’re not seeing as many transactions, but our average dollar sale is up. Customers seem to be stocking up more.”

How well a particular dispensary is doing also has to do with what type of customer it caters to.

Some dispensaries, like Planet 13 and its two locations, are geared toward tourists. Others, such as Curaleaf and its Acres-branded store, have a stronger Las Vegas locals clientele.

With Las Vegas visitation numbers down significantly because of the pandemic, there are a fewer tourist dollars to go around.

Last year, about 42 million people visited Southern Nevada, according to the Las Vegas Convention and Visitors Authority. When the estimated figure for 2020 comes out, visitation is expected to be down by as much as 50%.

That hasn’t been good news for Planet 13, which invested last year in a multimillion-dollar expansion of its superstore on West Desert Inn Road near Sammy Davis Jr. Drive.

Before the pandemic, tourists were responsible for about 85% of Planet 13’s sales, said David Farris, vice president for sales and marketing.

“Tourism is what we built that location for, so we’re hoping that begins to return, perhaps mid-year 2021,” Farris said. “We pivoted to 100% locals. With some casinos shutting down on certain days now, it’s certainly not helpful.”

A number of Strip resorts have ceased midweek hotel operations because of a lack of demand.

For the tourist-focused dispensary operations that can weather the COVID-19 storm, the long-term payoff could be significant, Farris said.

Planet 13, which had been used to customers coming to them, now has a fleet of about 30 delivery vehicles.

“Delivery and curbside pickup, these are long-term solutions for us,” Farris said. “We look at this as an opportunity to service the local customer and to build a following there. When tourism returns to full strength, whenever that ends up happening, it’s icing on the cake.”

Relaxed federal marijuana regulations — a distinct possibility with a new presidential administration coming in — could also be a boon for the industry.

Last week, the House voted to decriminalize marijuana at the federal level, though the measure faced Republican opposition.

“The House has passed similar legislation in the past,” but it seems to “hit a wall” in the Republican-controlled Senate Wiegland said.

But the tide is shifting, he said. “I think we’ll have a White House now that will open to, if not legalization, decriminalization,” he said.

Chris Molina, an attorney with McDonald Carano who often works with dispensary operators, said federal decriminalization would be a big boost for cannabis businesses.

“It would make things a lot easier,” Molina said “They would have all the advantages of a normal business. They’d be able to use the banking system normally and they’d have an easier time getting loans, buying property and funding construction.”

In the meantime, Russ said, “We’re definitely doing OK, but nobody really knows how COVID-19 will impact the future.”