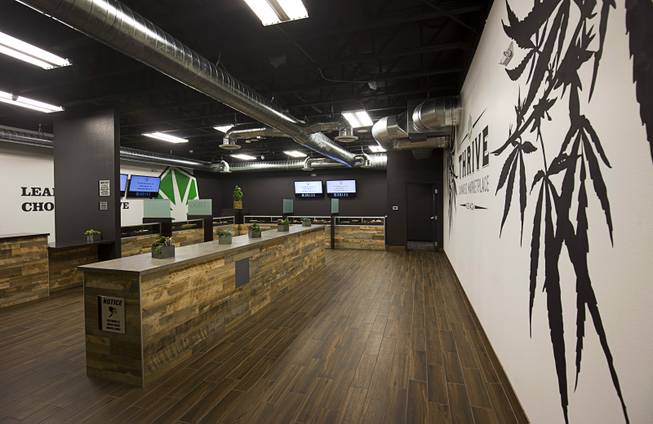 A view of Thrive Cannabis Marketplace, a medical marijuana dispensary, Tuesday, May 17, 2016.

Before the coronavirus outbreak, Thrive Cannabis Marketplace in North Las Vegas was making about three dozen deliveries a day.

But with dispensaries only permitted to offer delivery service after nonessential businesses were ordered closed, Thrive is making several hundred deliveries a day.

“Previously, deliveries were a very small portion of our business,” said Ashley Blackwood, director of compliance for Thrive. “We used to have a very small fleet, but we’ve since doubled, tripled and quadrupled it. We’ll continue to increase the drivers we have on the road as well as increasing the area in which we serve. It’s been challenging to keep up this rapid pace.”

Thrive, which operates two other dispensaries in the valley, is making all its deliveries from its North Las Vegas store.

While Thrive does its own deliveries, a number of dispensaries in Las Vegas contract with a delivery service called BlackbirdGo, which operates in Nevada and California.

Blackbird spokesman Jamal Barghouti said the increased demand has pushed normal delivery time from a couple of hours to up to 36 hours.

“People are understanding and largely appreciative for still having access to cannabis,” Barghouti said. “We are evaluating daily how we can streamline our new process and each day goes a little smoother than the day before.”

Acres Cannabis in Las Vegas, which is owned by a company called Curaleaf, has never offered delivery service but is scrambling to get one up and running.

“We are figuring it out,” said Nicole Silverman, Curaleaf Nevada’s director of marketing. “If we could even do curbside pickup, which I know has been proposed, that would allow us to open and to be able to get product to patients and customers in need.”

Even after the closure order was issued, some customers were still showing up at dispensaries. “We’ve had to turn away so many people who just didn’t know that the governor ordered us to close our storefronts,” Blackwood said.

Planet 13 dispensary in Las Vegas, which offers around-the-clock delivery, has tripled its fleet of delivery vehicles to keep up with orders, said David Farris, vice president of sales and marketing. “It’s been through the roof. We’re doing our best to handle that demand,” he said.

Tiffany Hoven, director of operations for The Grove, said the dispensary had previously offered contract delivery service in Las Vegas but started in-house delivery virtually “overnight” for customers in the valley and Pahrump.

“In less than a couple days, we created and implemented a full, in-house delivery service for Pahrump and Las Vegas, all while following strict compliance regulations,” Hoven said. “That would normally take multiple weeks to roll out. It’s been crazy.”

While some dispensaries cater mostly to tourists — nearly nonexistent in Las Vegas these days — locals are driving sales now.

“People are confined to their houses; they can’t go the bars and places like that, so I think people are exploring cannabis a little more,” Blackwood said. “I think people are more open to it. We’re seeing a significant uptick. I’m happy we’re able to serve the Southern Nevada community and perhaps alleviate some of the anxieties people are feeling right now in this climate.”