Police had first attempted to stop the vehicle about 1:30 a.m. on State 47 near Midway Road for traffic violations and suspicious activities, but the driver continued and eventually stopped on Midway Road.

A female passenger then attempted to run away on foot, police said, but was caught after a short chase.

She was arrested and charged with resisting arrest and child endangerment and had a felony warrant. 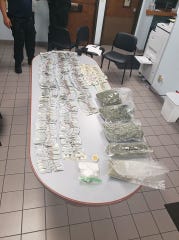 Two teenage children were inside the vehicle at the time of the incident.

A male driver was arrested and charged with possession of marijuana with intent to deliver, child endangerment and probation violations.

Menominee County sheriff’s deputies responded to assist and the county’s K-9, Ruger, alerted officers that drugs were in the vehicle.

Also uncovered was a small bag containing marijuana and a wax-like substance known as “dabs” in the amount of 208.1 grams.

Police have not yet released the identity of those arrested.

Frank Vaisvilas is a Report For America corps member based at the Green Bay Press-Gazette covering Native American issues in Wisconsin. He can be reached at 920-228-0437 or fvaisvilas@gannett.com, or on Twitter at @vaisvilas_frank. Please consider supporting journalism that informs our democracy with a tax-deductible gift to this reporting effort at GreenBayPressGazette.com/RFA.