PNP seizes P81.62M worth of marijuana in various operations 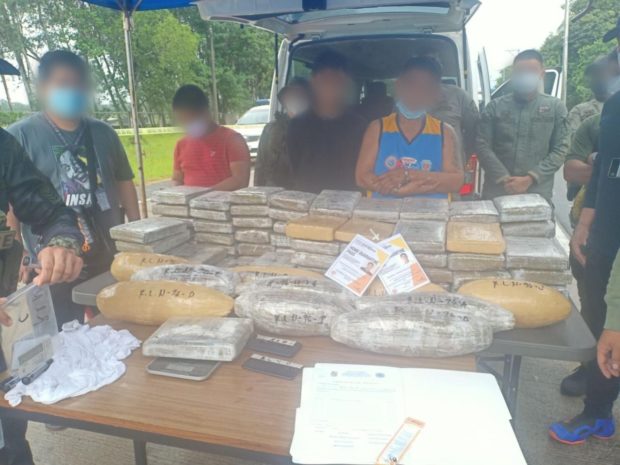 Police conduct an inventory of the P13 million worth of marijuana intercepted at a checkpoint in Mabalacat City, Pampanga on Sunday, August 9, 2020. Photo from PNP

MANILA, Philippines — The Philippine National Police has confiscated marijuana products worth around P81.62 million in seven separate anti-drug operations in the past three weeks that also saw the destruction of three marijuana farms.

PNP chief Gen. Archie Gamboa said Monday that personnel of the 3rd Regional Mobile Force Battalion intercepted a shipment of 107 bricks of high-grade marijuana worth P13 million from two suspects on board a white van in a police checkpoint in Mabalacat City, Pampanga on Sunday.

Operatives of the District Drug Enforcement Unit of the Northern Police District also recently arrested three suspects in a series of operations in Valenzuela City and Antipolo City, where 34 kilograms of Marijuana and 156 grams of kush or high-grade marijuana worth around P4.3 million were seized.

Gamboa said police also launched separate operations in Tinglayan, Kalinga, and in Toledo City in Cebu, which yielded a total of 286,150 fully-grown marijuana plants priced at P59 million. The marijuana plants were destroyed on site.

Meanwhile in Quezon, Isabela, police recovered an abandoned stash of 42 kilograms of marijuana bricks discovered by a jogger along Quezon Boulevard Botanical Park. Police said the recovered contraband is worth around P5 million.

In a statement, Gamboa said the PNP will continue to intensify operations against drug syndicates despite the coronavirus disease pandemic, which had also caused the infection of 2,492 of its personnel.

“Drug traffickers are taking advantage of the pandemic under the mistaken notion that the PNP is more preoccupied with health concerns. Be warned. We will intensify operations and continue going after the syndicates, whether big or small,” Gamboa said.