A raid led by the California Department of Consumer Affairs resulted in a $14.5 million seizure of illegal cannabis flowers and concentrates Thursday, officials said Friday.

“(We) served a search warrant on an unlicensed manufacturer and distributor at 26046 Bouquet Canyon Road,” said Alex Traverso, assistant chief of communications for the Bureau of Cannabis Control, via email on Friday. “The search warrant resulted in the seizure of cannabis flower and cannabis concentrates with an estimated retail value of $14,569,200.”

The raid, which occurred on the 26000 block of Bouquet Canyon Road, featured a multi-agency operation blocking off a lane on the busy road, with DEA, Los Angeles Interagency Metropolitan Police Apprehension Crime Task Force and Los Angeles County Fire HAZMAT working side by side with the DCA’s Cannabis Enforcement Unit.

As officials walked in and out of the building, almost all of them wore either face masks or personal protective gear.

A large amount of what appeared to be lab equipment, kitty litter and trash bags were being either lined up on the ground or loaded into the back of an Enterprise truck rental.

Officials were seen on the side of the road with a blue tent and a health HAZMAT truck.

No arrests have yet been made in connection to the raid and seizure of cannabis flowers and concentrates, but the investigation remains ongoing, according to Traverso. 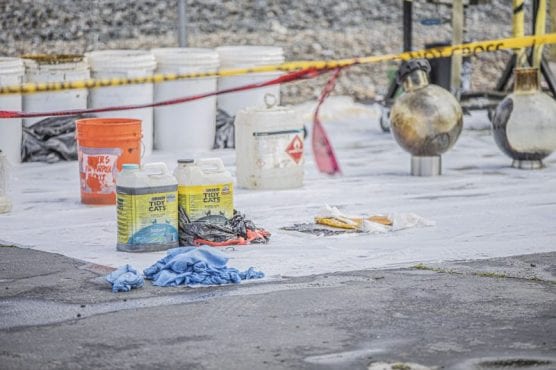