Support Cannabis Legalisation Lifts To 56% Ahead Of Referendum

Less than three months out from the General Election, an
independent survey of nearly 1,600 Kiwis shows 56% will vote
for legalising the personal use of cannabis at the
referendum – up from 54% in February. 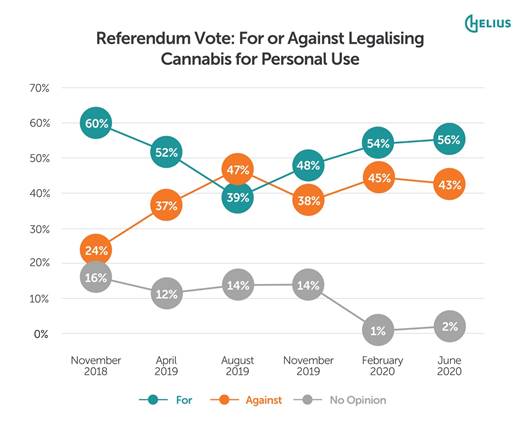 “This result
will energise both the yes and no camps. It shows just how
close the vote will be, with 81% of Kiwis also declaring
that prohibition has failed to limit cannabis access and
use. The opportunity for wider reform is something all New
Zealanders must start thinking about,” says Paul Manning,
Chief Executive of Helius Therapeutics.

“This is a
polarising debate but despite prohibition, cannabis is
already widely accessible in New Zealand. September’s
referendum is fundamentally a decision about who we want to
control cannabis. Government-led control would weaken the
stranglehold gangs have on our communities. Reform transfers
cannabis access to a regulated, locally-owned businesses,
delivering jobs and tax revenue, while ushering in quality
standards and strict access controls,” says Mr
Manning.

With
overall support at 56% and those against at 43%, down from
45%, the June survey also reveals women favour legalisation
more than men. Since February support for legalisation among
women has risen 4% to 59%, with 52% of men set to vote
yes.

Legalising the personal use of cannabis achieves
majority support among all Kiwis deemed young adults or
middle-aged – 18 to 64-year-olds.

Senior New
Zealanders are the only group opposed, but support among
older demographics has been steadily increasing throughout
Horizon’s series of tracking surveys.

With support peaking at 72% among 25 to
34-year-olds, youth turn-out will be important for
proponents, particularly young adults who support
centre-left and liberal parties.

Notably, New Zealand
First voters have now shifted to support reform. In fact,
based on survey respondents’ 2017 party vote, voters for
four of the five parties currently in Parliament now support
legalisation, up from two in February.

53% of New
Zealand First voters and 70% of ACT voters will now tick yes
at the referendum – up from 46% and 45% respectively in
February.

Support continues to firm up among
supporters of the two main centre-left parties, with 72% of
Labour voters and 81% of Green voters intending to vote in
favour of cannabis legalisation – up from 64% and 78%
respectively.

Only National voters remain opposed,
although nearly one-third say they will vote yes. Among
National voters, support is now at 31% – up from 27% in
February.

With overall support now at 56%, the large
public survey has tracked support steadily returning for
personal-use cannabis legalisation, after it bottomed out 10
months ago.

To better emulate the choice voters will have
when they vote at the upcoming referendum, the two latest
surveys removed the previous ‘no opinion’ option,
forcing a yes or no response. This equally lifted both
support and opposition to reform.

For the second time in the series, two
questions were asked about whether prohibition is working to
limit the availability and use of cannabis, and whether
controls over growing and selling cannabis would deliver a
better outcome for society. The latest results show New
Zealanders’ strong views on both issues have barely
changed since February.

Researchers asks if the
prohibition of cannabis was limiting access and use, only
17% said it was. A staggering 81% said cannabis is available
and used by many New Zealanders, and 2% gave no
response.

On whether respondents believed controls
over growing and selling cannabis for personal use would
deliver a better outcome for society, 71% said yes, 27%
supported continuing with no controls, and 3% gave no
response.

Mr Manning says Kiwis of all ages are
unified in their belief that prohibition is failing, and
controls would be preferable.

“Interestingly, older
and conservative Kiwis believe New Zealand can do better.
75% of National voters support controls over growing and
selling cannabis, yet they don’t support the referendum. I
suspect that’s because the issue is largely seen as
politically partisan, but we all need to put party politics
aside and think seriously about the issue of control,” he
says.

The medicinal cannabis entrepreneur says it’s
important that opponents read the draft Cannabis
Legalisation and Control Bill, which will be introduced into
Parliament if the September referendum passes.

“New
Zealanders have less than three months to decide who they
want to ultimately control the cannabis market. There are
only two choices: Gangs or government.

Commissioned by
Helius Therapeutics and carried out independently by Horizon
Research, the results are from a nationwide online survey of
1,593 adults representing the 18+ population at the 2018
census, conducted between 10 and 14 June
2020.

Respondents were members of Horizon’s
HorizonPoll panel and a third party representative
nationwide research panel, both of which represent the New
Zealand adult population at the 2018 Census. Results are
weighted by age, gender, highest education, personal income,
employment status and party voted for at the 2017 general
election. At a 95% confidence level, the maximum margin of
error is ±2.5%.

Helius and Horizon’s tracking of
public opinion on the referendum over the past 20 months
makes it the most significant series of surveys on the
issue.

Question: At this
time, do you think you will vote for or against legalising
cannabis for personal use in New
Zealand?

Question:
Currently, producing cannabis for personal or
non-prescription use is prohibited in New Zealand, with the
intention of limiting its availability and use. Do you think
prohibition of cannabis is working in New Zealand
society?

Question: Currently, growing
cannabis for personal use is prohibited in New Zealand.
Which one of the following options do you think will have a
better outcome for New Zealand society?

20 years of independent publishing is a milestone, but your support is essential to keep Scoop thriving. We are building on our offering with thedig.nz our new In-depth Engaged Journalism platform. Now, more than ever sustainable financial support of the Scoop Foundation for Public Interest Journalism will help to keep these vital and participatory media services running.

Find out more and join us:

Become a member
Find out more