Courtesy Photo
Meds Cafe owner Scott Schroeder takes a hit off a joint on Friday in Rogers City. Schroeder said he has been considering opening a medical marijuana store in Alpena, but has been unable to find the proper location.

ALPENA — The city has since July 3 been open to accepting medical marijuana license applications, but, surprisingly to some, none have yet been submitted.

The deadline is Aug. 16 for applications to be submitted for consideration.

The city’s medical marijuana ordinance passed earlier this year allows a pair of each of the four types of medical marijuana businesses: provisioning centers, growers, testing facilities, and transportation companies. No pot businesses are allowed downtown.

The 2018 voter-approved law allowing recreational marijuana in the state also allows local governments to set limits on marijuana businesses, including outright banning them within their borders. Governments who ban the businesses lose out on a share of tax revenue from the marijuana industry.

The lack of applications in Alpena is surprising, officials said, because city leaders reported during the crafting of the city’s ordinance great interest from people in and outside Alpena. 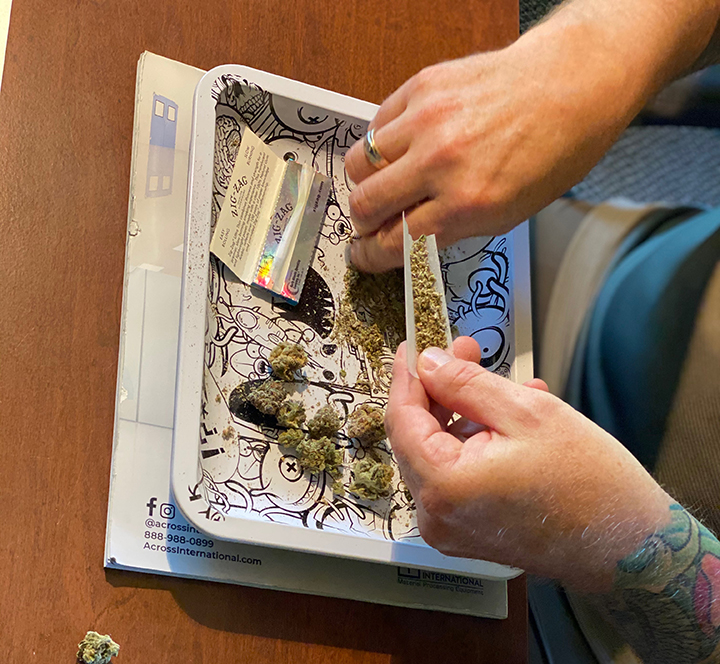 Courtesy Photo
Meds Cafe owner Scott Schroeder breaks up some marijuana buds from a bag that he will roll into joints.

City Manager Rachel Smolinski said she is somewhat surprised no applications have been submitted, but said there’s still time and there could be a late rush.

She added that some interest could have been dampened by the Alpena Municipal Council’s decision prohibiting provisioning centers downtown, where there is a great deal of foot traffic. Or it could be because the COVID-19 pandemic has slowed the licensing process at the state level, where potential pot shop owners have to go before beginning the permit process locally.

“Not allowing them downtown may be part of it, but I received interest from people after that decision was made,” Smolinski said. “COVID impacted everything, so that might be an issue at the state level, but I don’t think it is that drastic. I’m still getting inquiries, so I’m confident we’ll get some applications before the deadline.”

Meds Cafe near Rogers City, the only marijuana facility in Northeast Michigan, began as a medical marijuana shop but now sells recreational pot, too, because Rogers Township allows it.

Schroeder said he’s interested in opening a business in Alpena and has hired a real estate agent to find a location for a possible dispensary, but, so far, he has come up empty.

He said he believes the city’s decision to limit where the businesses can open is limiting interest.

“They decided not to have them downtown, and then you can’t have them in this area, and I think it is complicating matters for them,” he said. “I kept striking out on finding a place in the areas where it is allowed, and I wonder if other companies are facing the same problem.”

Schroeder said most owners also consider whether a municipality is moving toward allowing the sale of recreational marijuana. He said he saw a significant jump in profits in Rogers Township after he was allowed to sell recreational weed.

“My sales tripled,” he said. “So what does that tell you?”

Schroeder said the application and licensing fees the city charges are in line with what others charge, and he doesn’t believe that’s deterring interest.

Waligora, the Alpena mayor, is also surprised no applications have been submitted, yet, but he, like Smolinski, believes there will be some before the deadline.

He said that, during the ordinance process, he was contacted often by people interested in opening businesses and also by some already involved in the industry who tried to help the city craft the best ordinance possible.

“I’m not directly involved in the industry, so I don’t really know what is going on,” Waligora said. “I do know that we had people speaking in support of it during our meetings, and I was getting constant correspondence during the process. I am surprised nobody has jumped right on this.”

If no applications are received before the deadline, Smolinski said, there would have to be discussion between city staff and the council on whether to push the deadline back.

But, at this point, she doesn’t expect that to happen. She said the city is trying to make it as easy as possible for businesses to open in Alpena.

Schroeder said he believes there needs to be some tweaks made to Alpena’s ordinance to make it less restrictive.

“Hopefully, they revisit some of these things and rework them,” he said. “It isn’t a bad ordinance, but there are ways to make it easier and more appealing.”

Courtesy Photo
Meds Cafe owner Scott Schroeder breaks up some marijuana buds from a bag that he will roll into joints.

Courtesy Photo
Meds Cafe owner Scott Schroeder takes a hit off a joint on Friday in Rogers City. Schroeder said he has been considering opening a medical marijuana store in Alpena, but has been unable to find the proper location.


ALPENA — The coronavirus pandemic slowed arrests for drug activity, but the amount of methamphetamine and other …