Again on top at Bay Hill, Matt Every pushing back on Tour’s marijuana stance

He can go deep on marijuana’s medicinal benefits, as he did after taking the first-round lead Thursday at the Arnold Palmer Invitational, where he followed up the 85 he shot missing the cut at the Honda Classic last week with a bogey-free 65 at Bay Hill Lodge & Club.

But don’t ask him how he can pump four balls in the water at the fifth hole at PGA National’s Champion Course on his way to making an octuple-bogey 11 last Friday and then make seven birdies and no bogeys in his very next round in a PGA Tour event.

“I don’t know,” Every said. “I wouldn’t read too much into that last round.” 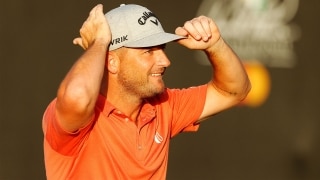 World No. 1 Rory McIlroy is on the Bay Hill leaderboard, but they’re all chasing two-time champion Matt Every.

His best guess as to why he can be so wildly inconsistent?

“My short-term memory isn’t very good,” he said. “That is a strength sometimes.”

Or maybe it was the adjustments he made to his irons, bending them 2 degrees more upright.

Or it maybe it’s just Bay Hill Lodge & Golf Club being good for what ails him.

Every did win in back-to-back years, with his triumphs in 2014 and ’15 standing as his only PGA Tour titles. He grew up in Daytona Beach, just an hour northeast of Orlando, and his father used to take him to watch Arnold Palmer’s tournament.

But his dramatic bounce back here isn’t as simple as that.

Last year, Every opened with an 83 here and missed the cut.

Two years ago, he shot 80 on Friday and missed the cut.

He doesn’t try too hard to make sense of it all.

Every had an easier time explaining how his life might not have as many ups and downs if the PGA Tour didn’t treat marijuana the way it does. He went on a little mini-rant after his round, when asked about the Tour’s drug-testing policy and his failed bids to get therapeutic use exemptions for marijuana.

“Anxiety is a real thing,” he said. “I treat it the healthiest way possible for my body.”

Every was suspended for 12 weeks by the PGA Tour last fall for violating its drug-testing policy. He later revealed it was for using cannabis, even though the state of Florida allows him to use it with a prescription.

“I am at peace with it,” Every said of the Tour’s stance. “It doesn’t bother me at all.”

Except, that, well, it does.

“I change my mind,” Every said. “That’s wrong. It bothers me that it’s even an issue out here at all. I think it doesn’t do anybody any favors that it’s even on the list for a prohibited substance.

“You could fail for heroin and marijuana, and the penalty is the same. If anyone wants to make the argument that it is performance enhancing, they have never done it before. I promise it’s not.”

Every said he finds it frustrating that the PGA Tour’s policy sets the limit for THC in a player’s system at 150 nanograms.

Every hasn’t given up hope he might eventually get a therapeutic use exemption.

“I don’t want to be a spokesperson for it. I’m not into that. I’ve tried other options. Snake oil. I mean, CBD oil, whatever. I know what works for me. I’ve had to dial back a little bit, but it is what it is.”

It’s another crazy week for Every, one that will surprise nobody if it ends with him unable to explain how he’s hoisting the trophy again.