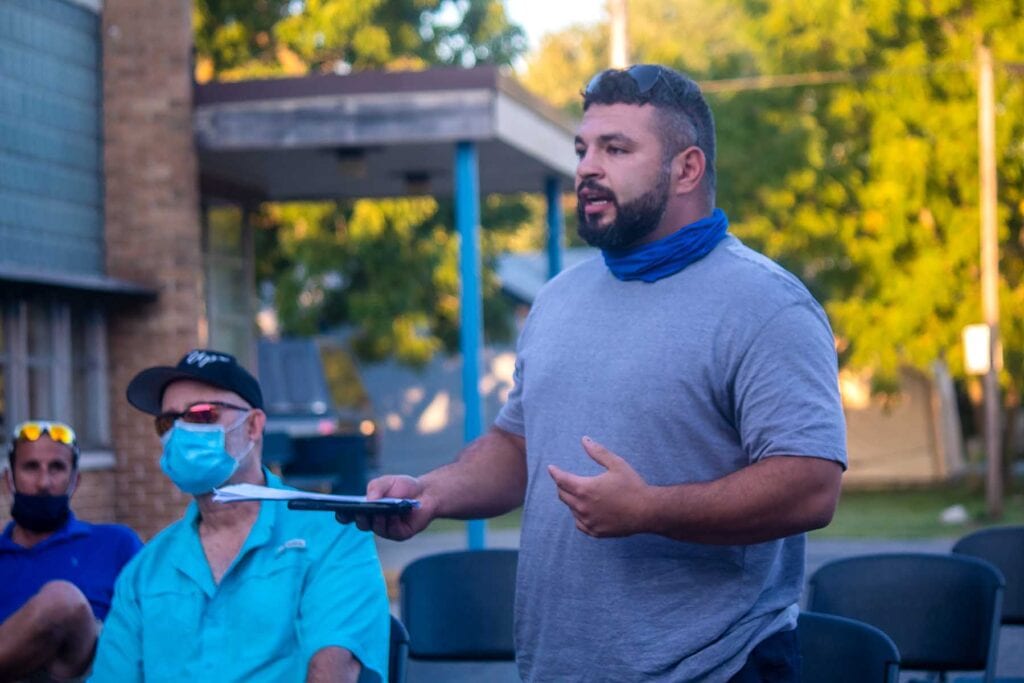 Jim Chandler of Crystal voices his frustrations toward the Crystal Township Board regarding their decision to defer his medical marijuana facility license application due to product unloading concerns during Wednesday’s meeting. — DN Photo | Brandon Schreur

CRYSTAL TOWNSHIP — The church bells may have been ringing out “Ode To Joy,” but one resident was decidedly not full of joy as he walked away from Wednesday’s Crystal Township Board meeting.

Last week, the township board held a special meeting to go over a licensing application that Jim Chandler submitted in hopes to turn the Crystal Clean Laundromat building at 102 Main St. into a medical marijuana dispensary.

During Wednesday’s meeting, the board unanimously voted to defer granting the application for the time being due to some concerns with Chandler’s site plans.

Coming out of closed session, Treasurer Nancy Mills began to explain where the board had landed on Chandler’s application when she was interrupted by the sound of ringing bells from the church next door to the Crystal Community Center.

Mills paused until “Ode To Joy” had finished ringing out, then she resumed sharing her thoughts when the audience seated outside could hear her again.

“This is the board’s concern,” Mills said. “Under section 10, licensing obligation, section B, it’s the unloading and loading outside the facility in a manner that is visible to the general public. At this point, we feel that it is visible. That’s why we’re not moving forward with anything more at this time.”

“How would it be visible?” Chandler asked from the audience. 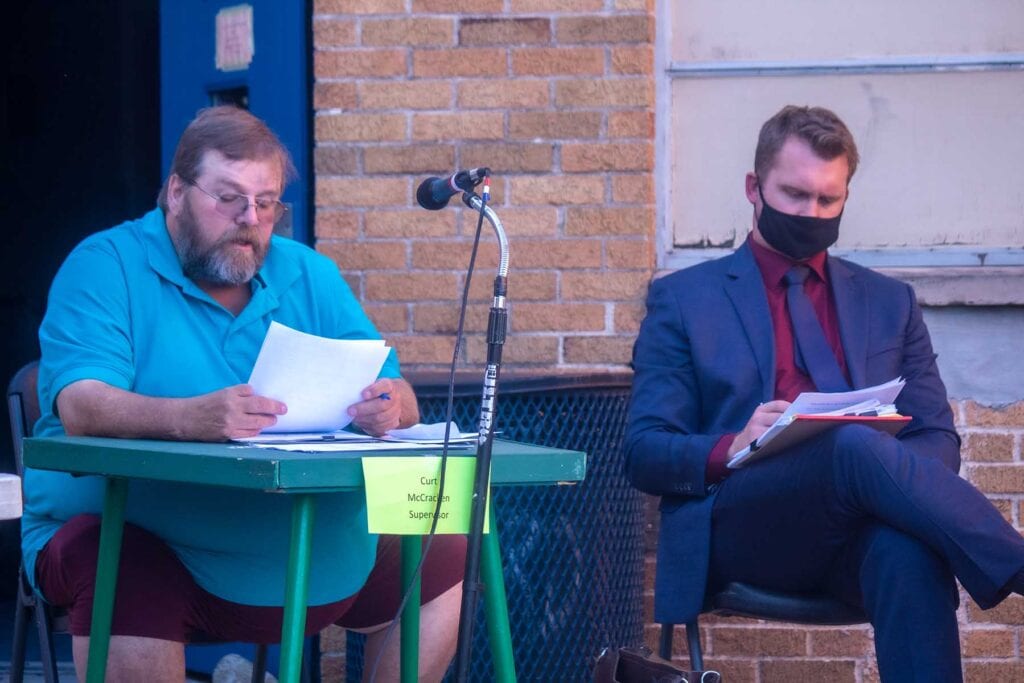 Becoming visibly angry, Chandler asked the board to clarify their specific concerns with his business’ loading and unloading plan.

“I just want you guys to explain to me what the hold-up would be,” he stood up to ask. “Nothing is getting unloaded there. If they walk outside with a package, is that unloading something? This is a really cheap way to prolong (the process).”

“I need you guys to explain to me how it’s visible,” he continued upon hearing no feedback from the board. “If that’s the issue, explain to me how. What is being unloaded? Nothing is being received until it gets inside. It’s strict. I’m following the rules.”

Trustee Sherry Kutt said the board didn’t think the business would be able to discretely unload supplies given the building’s centralized location.

Eberle advised the board to clarify that Chandler’s application was not denied at this time and that they were instead asking him to amend his site plan so it can come before the board again at a later date.

“Throughout discussion by the board, maybe there can be indication by board members what their specific concerns are so as to provide guidance to the applicant so he can revise the site plan when he’s working with the clerk,” Eberle noted.

Supervisor Curt McCracken said the board was looking for more than just a doorway entrance for the receiving area.

“Our ordinance says you’re supposed to be backed-up to a dock or something,” McCracken said. “We’re afraid you’re just going to take it off your truck and walk into your room.” 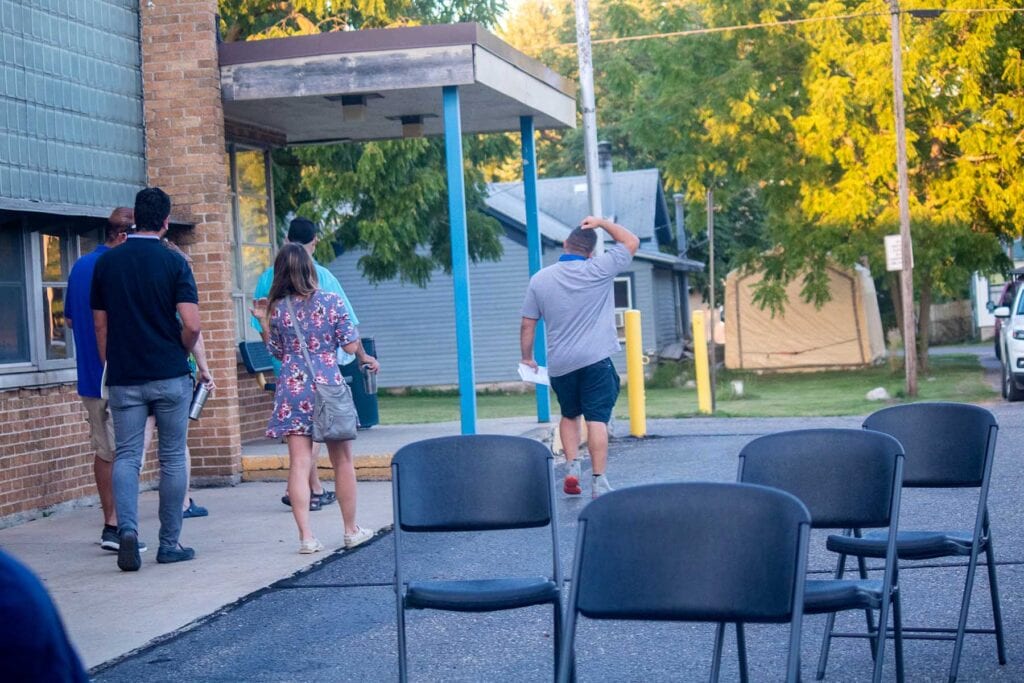 “If it’s in a box, who’s going to know what’s in it?” asked Chandler’s attorney Joseph Nafsu from the audience. “It could be shoes.”

“A shoebox isn’t going to cut it,” Trustee Drew Lane replied. “Kids aren’t stupid. You have to get it from one place into your receiving center. The concern that we have is that you’ll be walking around with boxes of your product into the facility.”

Chandler pointed out that bringing in boxes would be no different than customers walking outside the building to their vehicles.

“I’m not going to touch it until it’s inside the building,” he said. “If anyone walks outside to their car, is that unloading? That sounds like the same thing you’re trying to explain to me. That’s not a real answer. If this is an issue for you guys, I need to better understand what the real issue is. I’m doing everything you asked. I did everything you asked, to a tee. Everything you guys have asked, I put into my site plan. You guys came up with a thing that’s not even real.”

“Loading and unloading, that’s what it says,” said Mills before making a motion to have Chandler amend his site plan and return it to the board.

“How can anyone walk in, then, is my question to you guys?” Chandler asked. “It’s not (valid) what you’re saying. I know you want to move forward, Nancy, but please understand what I’m trying to explain. What you’re saying is not (valid). There is a dedicated room for receiving. Just like a company that brings beer to a cooler, they don’t receive anything until it’s inside the store. It’s the same exact thing.”

Mills’ motion still passed unanimously, as did a motion to defer amending the township’s licensing and application rules to accommodate Chandler’s application.

Still visibly upset over the decision, Chandler exited the meeting shortly after the board’s vote.