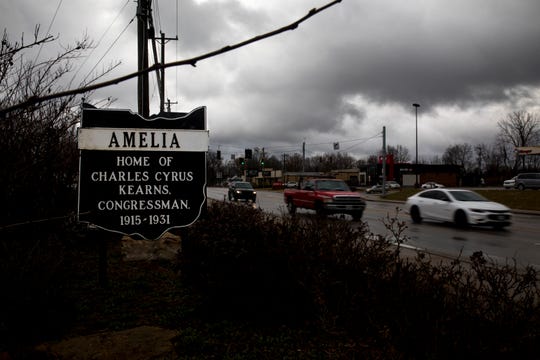 Curaleaf Holdings Inc. says it surrendered a license to make medical marijuana products in Amelia in part because the village dissolved and the site was incorporated into Batavia Township, which has a ban on medical marijuana businesses. (Photo: Albert Cesare / The Enquirer, Cincinnati Enquirer)

COLUMBUS – One of the biggest marijuana companies in the U.S. has forfeited its license to make medical marijuana products in Southwest Ohio, paving the way to acquire a more lucrative operation in central Ohio.

Massachusetts-based Curaleaf Holdings Inc. surrendered its processor license April 1 after state regulators informed the company it could not hold more than one license. The provisional license was awarded to the company under its former name PalliaTech Ohio LLC on Feb. 1, 2019 for a site in the village of Amelia in Clermont County.

PalliaTech changed its name to Curaleaf in August 2018 – eight months after it submitted applications to grow, process and sell medical marijuana in Ohio. In May 2019, Curaleaf, which operates in 17 states, announced it planned to acquire a processing and cultivation facility belonging to Johnstown company Ohio Green Therapies LLC.

But Ohio rules prohibit ownership transfers until the facility has been built out, passed final inspection and been OK’d to open.

The Ohio Department of Commerce, which regulates medical marijuana growers and processors, notified Curaleaf of the rule “soon after” its May 2019 announcement and met with Curaleaf officials Oct. 10, spokeswoman Jennifer Jarrell said.

Commerce officials declined to comment to The Enquirer about the Curaleaf announcement in early September 2019, reiterating the rule that companies may not own more than one cultivation or processing license.

Curaleaf spokeswoman Tracy Brady said the company was working with state regulators to transfer the license to another company. She declined to say which regulators.

A commerce department spokeswoman said the company was not working with them on a transfer.

“An application for transfer of ownership was never filed with the department,” spokeswoman Mikaela Hunt said. “Even if it had been, a transfer like that would not have been allowed. At the time PalliaTech surrendered its license, it was provisional and change of ownerships are not permitted for provisional licenses.”

Soon after the October meeting, another problem emerged: Amelia dissolved following the November 2019 election. The site became part of Batavia Township, which has a moratorium on medical marijuana businesses.

“The municipality that absorbed our location does not allow cannabis processing,” Brady said. “As you can imagine, this made it almost impossible to transfer the license to another party. Due to these factors, our best course forward was to surrender that license.”

Ohio Grown Therapies has not yet received a certificate of operation to open its cultivation and processing facilities. The option announced in May 2019 allows Curaleaf to pay $20 million for acquisition of the licenses and lease of the facility, upon regulatory approval.

Curaleaf is still working to acquire multi-state operator Grassroots Cannabis, which operates one cultivation facility, one processing facility and two dispensaries, according to a recent investor document filed with the Canadian Securities Administrators.

Ohio has issued provisional licenses to 47 processors including PalliaTech. As of last week, more than $129.8 million worth of medical marijuana has been sold in Ohio since the first dispensaries opened in January 2019.