Does cannabis affect your dreams? 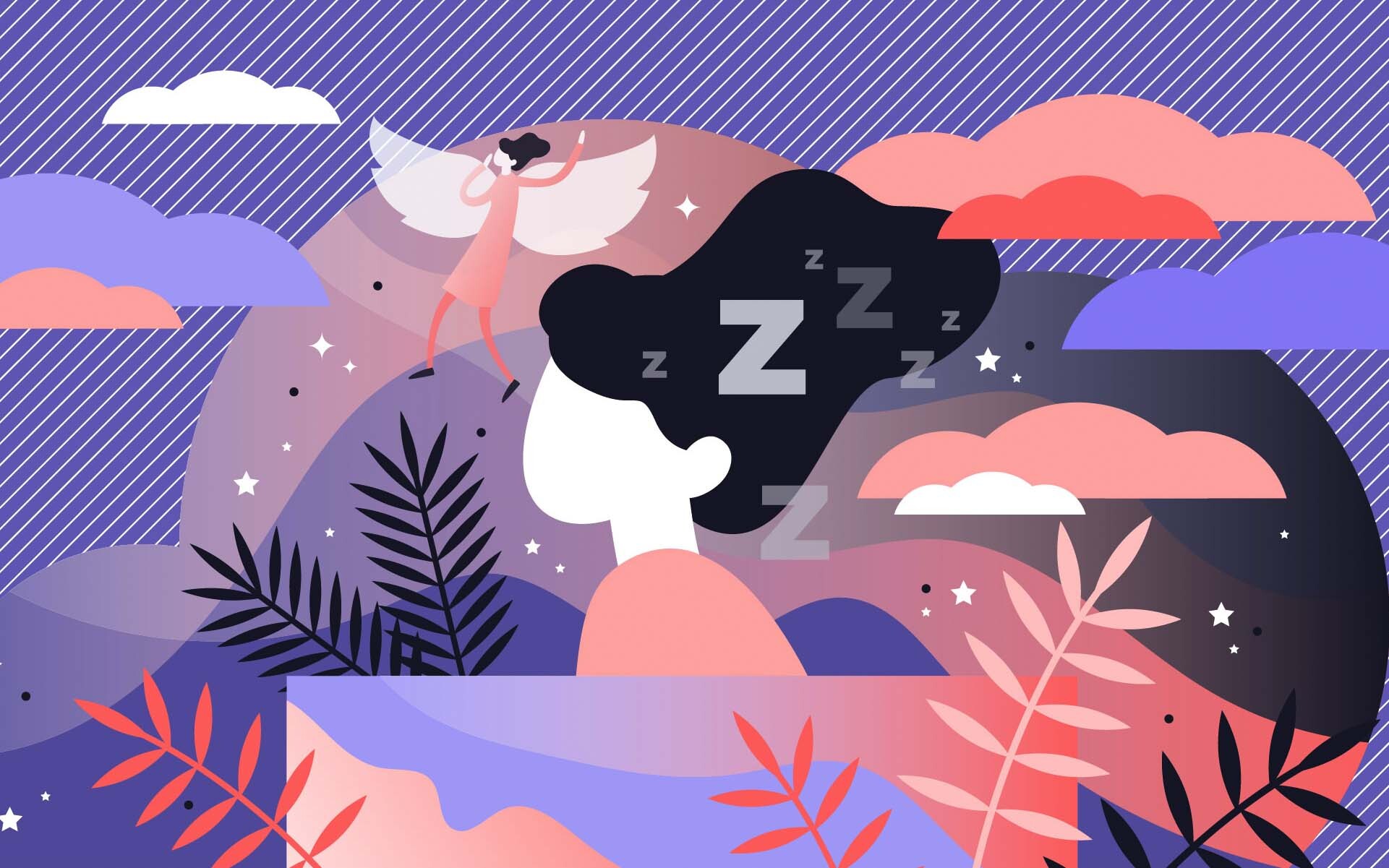 For some of us, a regular herbal nightcap makes slipping into sleep that much easier, and centuries of anecdotal evidence affirm the usefulness of weed as a sleep aid. Ancient Chinese pharmacology combined cannabis flower with datura to create the elegantly named “sagacious sleep powder,” or shui sheng san. Western medicine is now catching up, with research into cannabis and sleep on the rise.

But what about the effects of cannabis on dreaming? If you’re already well-acquainted with weed, you’re probably aware that periods of heavy consumption see your nocturnal imaginings diminish, if not vanish entirely. Conversely, intermittent periods of abstinence see an onslaught of bizarre dreamscapes.

So what’s the deal? How and why does cannabis impact the dreaming phase of sleep, and should you be concerned?

The sleep-wake cycle consists of four stages which are repeated multiple times during a typical night. Stage 1 is the lightest and briefest phase of sleep, lasting only 5% of the total cycle. Stage 2 signals a gear shift into a deeper slumber, with heart rate and temperature dropping. Approximately 50% of sleep is completed in stage 2.

Stage 3 is the deepest stage of sleep. If you’re woken up during this phase, you’ll feel groggy and cognitively impaired for up to an hour. Tissue repair and growth occurs in stage 3, along with the strengthening of the immune system.

The fourth stage is REM sleep, or dream sleep. REM refers to rapid eye movement, which occurs as you dream. Up to two hours of every night are spent dreaming.

Dreaming: Why it’s so critical

Scientists and sleep experts have debated the purpose of dreaming for decades. Up until recently, the utility of the REM phase was somewhat dismissed. In recent years, modern sleep guru Dr. Matthew Walker has emphasized the significance of REM sleep along with other experts, affirming that dream sleep holds functions fundamental to well-being and performance.

According to Walker, REM sleep removes the painful sting associated with traumatic or emotional episodes experienced during the day. On top of providing emotional resolution, dreaming enhances the creative process and problem-solving skills by fusing individual memories in abstract and novel manners.

Dreaming also plays a role in formulating overarching rules from knowledge the brain acquired during the day. Fascinatingly, REM sleep is the only time when noradrenaline, an anxiety-triggering molecule, is dramatically reduced in the brain.

Research conducted in 2016 on mice also indicates ongoing REM sleep deprivation over 72 hours impairs spatial memory. So you may find yourself experiencing more difficulty finding objects, or more prone to bumping into things. The study reported that this impaired state continued for at least 21 days after REM sleep had been restored.

“Dreaming is not just a funny thing that happens while we’re sleeping, but is a vital part of the restorative process and the memory and learning apparatus,” emphasized Dr. Jordan Tishler, President and CEO of the Association of Cannabis Specialists and an Instructor of Medicine at Harvard Medical School. “Deprivation of REM, in particular, can lead to cognitive dysfunction and mood alterations.”

Enter cannabis: How does it affect dreaming?

When it comes to determining the effects of weed on dreaming, the answer’s not clear-cut. “There are a number of sleep studies that show that cannabis can decrease or suppress REM sleep,” commented Dr. Tishler. “The larger question is whether this is good or bad. The answer is, as usual, ‘it depends.’”

Scientists are starting to tease out the effects of specific cannabinoids on dreaming.

THC, one of the main psychoactive components of cannabis, has been shown to suppress REM sleep, although it’s important to note that these findings have not been consistently replicated.

“Cannabis consumption, and specifically the consumption of THC, shortens REM sleep, eliminating most people’s ability to dream due to insufficient time in this phase,” said Kebra Smith-Bolden, registered nurse and CEO of CannaHealth.

A 2019 study found that cannabis consumers demonstrated less overall REM sleep than non-consumers, and more bizarreness when they recalled dreams, which was as often as non-cannabis consumers.

CBD’s meteoric rise as a sleep aid might have you wondering what effects it exerts over dreaming. While these effects are still not well understood, a 2017 review of sleep, cannabis, and cannabinoids suggests dosage seems to affect dreaming.

Anecdotally, CBD consumers have said that the cannabinoid significantly impacts their dreams, with some experiencing more vivid and lucid dreams, more positive dreams (including sex dreams), and a super-enhanced recall of their nocturnal adventures.

Additionally, there’s evidence that CBD could be a promising treatment for REM sleep behavior disorder, which causes those diagnosed to act out (often frightening) dreams in violent or vocal ways.

These dreaming disturbances are more commonly experienced by individuals with PTSD. “For patients who have nightmares, such as those with PTSD, some amount of REM suppression may be good,” explained Tishler.

Other minor cannabinoids and terpenes may also be working behind the scenes, impacting our dreams, but there’s no research at present to reveal their role.

Heavy cannabis consumers will be familiar with crazy dreams if they take a t-break, or refrain from using weed for awhile. “Rebound is characterized by the return of vivid and unusual dreams as your mind becomes reacquainted with the REM stage of sleeping,” said Smith-Bolden.

While REM rebound provides the mind with a means of recouping lost dream-sleep, according to Tishler, it can be disturbing. Those undergoing REM rebound often experience more nightmares, denser REM sleep, a more rapid REM sleep onset, and elongated REM sleep cycles to pay off the debt that’s accrued. “Heavy cannabis use is not recommended, for this and many other reasons,” added Tishler.

I consume cannabis regularly—how do I protect the REM phase?

If cannabis is your go-to sleep aid, it’s vital to avoid cycling between excessive REM sleep suppression and REM rebounding.

“For most individuals, REM suppression is likely not good,” said Tishler. “However, neither is insomnia.” Tishler advises striking a balance between overall sleep and REM sleep in particular.

“It turns out that this relationship is very dose-dependent. Small doses of cannabis lead to quality sleep without apparent REM suppression, or not much, whereas higher doses are more clearly problematic,” explained Tishler.

For those who have persistent insomnia, or more than three poor nights of sleep per week, he recommends consulting with a physician and then seeking the guidance of a cannabis specialist with their approval.

“The approach to treatment will vary with the type of insomnia you’re experiencing,” said Tishler. “Do not rely on advice from your buddy or the dispensary. They may suggest dramatically excessive approaches that can backfire. Low doses are more effective.”

Likewise, Bolden-Smith stresses that newbies using cannabis as a sleep aid should start by microdosing. “Increase incrementally until your sleep goals are achieved,” she advised. This way, you can harness the somnolent powers of the flower while protecting your REM sleep.

Emma Stone is a journalist based in New Zealand specializing in cannabis, health, and well-being. She has a Ph.D. in sociology and has worked as a researcher and lecturer, but loves being a writer most of all. She would happily spend her days writing, reading, wandering outdoors, eating and swimming.

More on cannabis and health