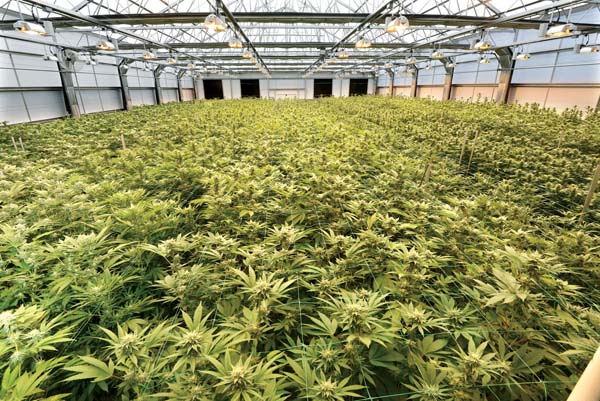 KULA — Christmas around parts of the country will be white, but at Maui Grown Therapies on the slopes of sunny Haleakala, it will be greener than ever.

Maui Grown opened the state’s first licensed dispensary in Kahului, along with a 7-acre Upcountry production site where its cannabis is cultivated and manufactured. The privately-held company, backed by doctors on a science and medical advisory board, is blazing the way for Hawaii’s medical marijuana cultivation, manufacturing and products.

Plus, with plans for an additional dispensary and production site infrastructure, Maui Grown won’t be slowing any time soon.

“Even at the end of the day, this facility is for the patients’ welfare,” said Teri Freitas Gorman, Maui Grown spokeswoman. “We’ll be able to increase our production, quadruple our production, which means our price per product comes down. And we are planning to pass those savings directly onto the patient.” 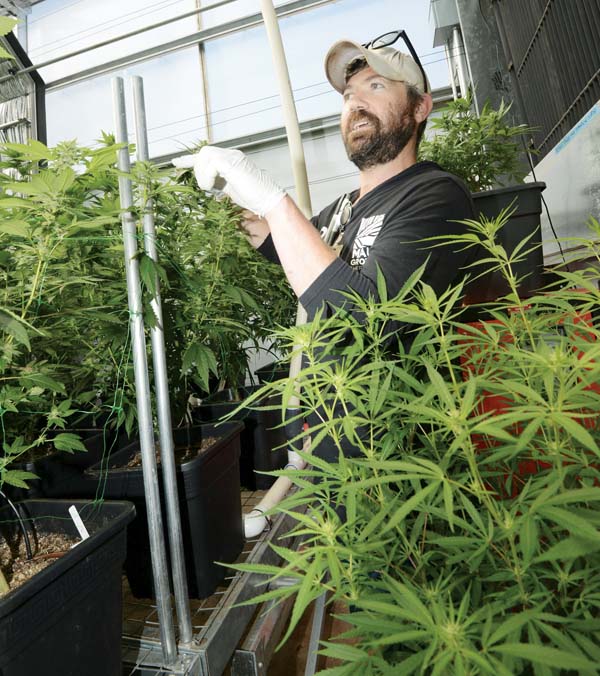 Christopher Cole, Maui Grown Therapies director of product development, inspects a variety of marijuana plants named Harle-Tsu while giving a tour of the business’ new production center last Wednesday. He said the Harle-Tsu plants are low in THC and “super high” in cannabidiol.

If director of product development Christopher Cole had to pick a favorite — even though it’s like choosing among children — he said it would be the new “Barbie strain.”

He held up leaves from the plant, growing in the new production center, and discussed how it came from one of 200 South Africa-based “Durban” seeds. This one grew into a rare female plant with THCV dominance, meaning it produced an unusually high amount of the cannabinoid.

Most people are familiar with THC varietals, along with unconventional medicinal varietals that hold CBD-rich materials, both of which are growing nearby. But “Barbie” is more unique.

“The reason Teri refers to it as the ‘Barbie strain’ is because THCV is known to create the opposite effect from the munchies,” Cole said. “So rather than making you hungry, it’s supposed to have appetite-suppressing effects, even anti-diabetic effects.” 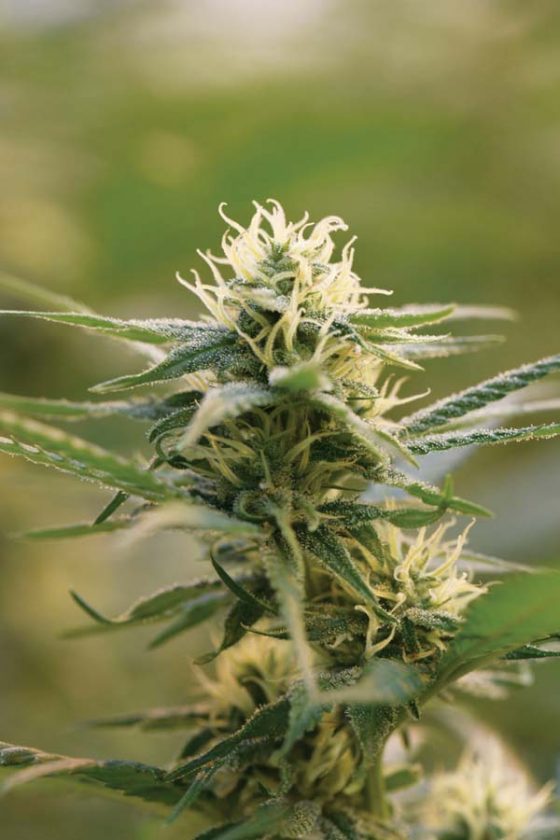 The cannabis plants in the Maui Grown Therapies PC-2 facility are allowed to bask in natural light, unlike the initial facility in which the state had limited natural light emissions.

The plant is flowering, and early formulation work will be done to “see what happens,” Cole said.

Along with “Barbie,” PC-2 holds 18 cultivars sitting on rolling bench systems that maximize space in the futuristic building. At capacity, 1,200 plants can be housed.

Cultivation started in PC-2 about two months ago and is custom-designed for Kula’s specific microclimate, meaning climate control systems are tailored to prevailing weather conditions. Cole said there is no other state that has the climate and photo period, the amount of hours of daylight versus darkness, compared with Hawaii.

Everything in PC-2 is meant to be automated — from electrical components, climate-control systems, hydrology, grow lamps, blackout curtains and more.

“The brain of the facility has all the controls,” Cole said. “We can automate everything: the amount of time in each day; you can program the lights to come on when the intensity of sunlight gets below a certain level to compensate for that; we can program the curtains to open and close; we can program the fans to come on and off whenever we’d like as a function of the prevailing temperature and humidity on the outside of the structure.”

PC-2 also directly harvests the sun, a far cry from enclosed PC-1, the adjacent and original production facility of roughly 6,300 square feet. Initially, the state prohibited a light-transmitting structure for security reasons. After amendments to the statute, new facilities can have light-transmitting roofs, Cole said. PC-2 is more labor-efficient and produces a greater volume of biomass used for medical cannabis products at a “much lower cost,” he added.

“The climate here for growing cannabis is just so great. For me, it seemed a little silly that we were sort of cooped up fully inside of doors for the last couple of years growing our product,” he said. “Not only is it a lot cheaper to do it this way, but I think the plants are just happier, they can grow to their full potential in this ideal climate that we have here.”

“This is the real Christmas tree farm in here,” Gorman said.

In an industry that eats tons of power, the Kula production site’s expanding renewable energy system sets it apart.

“To our knowledge, this is the only government-licensed cannabis production facility that’s zero emission, fully powered by renewable means,” Cole said.

Cannabis production under state license is energy intensive. In some Mainland markets, such as the American Southwest, power costs are 10 cents a kilowatt hour, according to Cole. Here, the same amount of energy is 42 cents.

“Even in that context, power is one of the highest recurring cost items that operators deal with,” Cole said.

Although Maui Electric Co. has one single-phase power line on the property, the power to run the Kula production centers comes from photovoltaic panels that collect solar energy throughout the day, then bank the surplus in on-site batteries.

Cole said the site currently has 650 kW of PV and 2.6 megawatt hours of battery storage.

In 2020, the company will move to phase five, which will create a capacity for 750 kW. That would be enough to build additional production modules, which they plan to do, he added.

The original production facility uses a recirculated water program, where humidity from grow rooms is captured, filtered and pumped into a tank, then repeatedly recycled. The new facility draws on county water and employs a drip irrigation system. Every few days, each plant gets about a gallon and a quarter of water.

“Compared to other types of crops, the water usage is very minimal,” Cole said.

As a whole, Hawaii’s state-licensed medicinal marijuana industry has yet to produce a profit.

Pointing to the budding industry, Gorman said “none of the state-licensed medical cannabis dispensaries are profitable at this time.”

The state has eight licensees — three on Oahu, one on Kauai, two on Maui, and two on Hawaii island.

“A recent study of the state of Hawaii’s medical cannabis sector concluded that losses incurred by the state’s eight licensees have exceeded $42 million to date,” she said.

Since its start in August 2017, Maui Grown investors have spent $17 million on the business. Gross revenue has grown by 84 percent over that time frame, she said.

The number of active patients has increased 180 percent since August 2017. Over two years, more than 4,000 patients have come through the doors. Regularly, Maui Grown has about 1,200 active and regular patients who visit weekly or monthly, depending on the conditions they have and products they’re using, Gorman said.

The dispensary at 44 Paa St. in Maui Lani offers various products. At the low end, sample-sized products are priced between $1 and $10. On the high end, very rare cultivars can run as high as $450 an ounce.

Several programs offer discounts for patients on public assistance and in hospice care and pediatric patients. Every Wednesday, kupuna older than 60 and military veterans receive a discount.

Maui Grown is the owner/developer of a multitenant site in Alexander & Baldwin’s Maui Business Park in Puunene that will include another dispensary near the new Maui County Service Center under construction, Gorman said.

Once the company has selected co-tenants, a target opening date will be announced.

In the new year, patients will see more products and lower prices, she said.

“They’ll be able to see new value pricing in 2020,” Gorman said. “Chris is working on (expanding the product line) right now. The new formulations that will be coming next year. So it’s exciting.”

* Kehaulani Cerizo can be reached at kcerizo@mauinews.com.

Police traffic commander Lt. William Hankins (left) and traffic investigator Ryan Ehlers examine the bicycle of a man who was killed in a collision with a pickup truck Tuesday on Kekaulike Avenue. The Maui News / LILA FUJIMOTO photos

The cannabis plants in the Maui Grown Therapies PC-2 facility are allowed to bask in natural light, unlike the initial facility in which the state had limited natural light emissions.

Christopher Cole, Maui Grown Therapies director of product development, inspects a variety of marijuana plants named Harle-Tsu while giving a tour of the business’ new production center last Wednesday. He said the Harle-Tsu plants are low in THC and “super high” in cannabidiol.