TWO CASES:
A man in New Taipei City complained that officers who raided his home had a search warrant only to look for firearms, not for drugs, which they also found

Police over the weekend made arrests in two cannabis cases in Taoyuan and New Taipei City.

A raid was conducted on Saturday, during which officers also found 400g of mixed synthetic drugs, Chen said, adding that a preliminary estimate valued the drugs at NT$1 million (US$32,995). 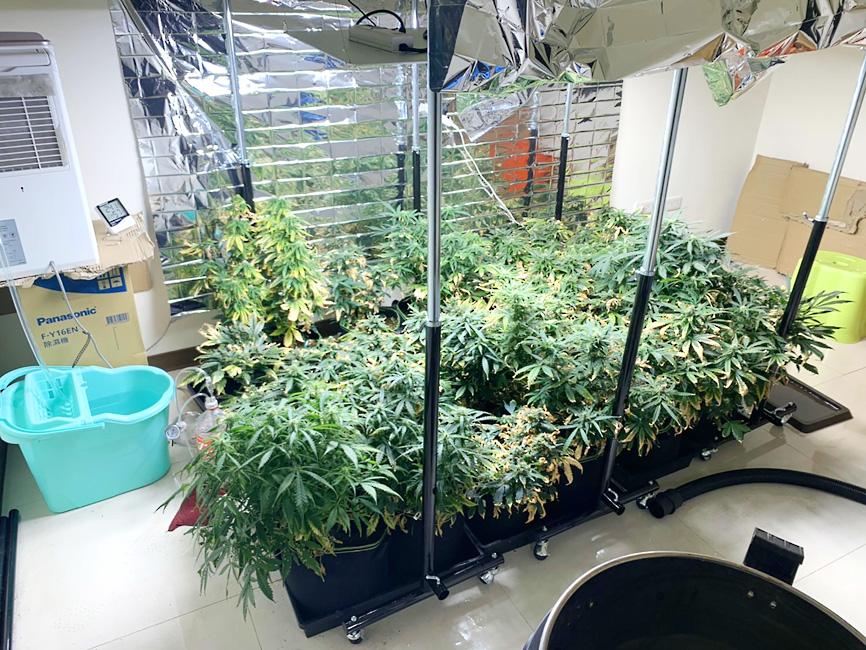 Chan was tracked and put under surveillance after police received a tip that someone was selling cannabis online, while police records showed that he was wanted on separate charges for fraud and assault.

Taoyuan prosecutors said Chanfaces charges over breaches of the Narcotics Hazard Prevention Act (毒品危害防制條例), which lists cannabis and its derived products as a category 2 narcotic.

Police said that he had a sophisticated set-up to cultivate cannabis plants, with devices to regulate temperature and humidity, equipment for watering and lighting, and a spacing arrangement for optimal growth of the potted plants.

Police said that Chan told them he had learned how to put the operation together from research online.

In New Taipei City, Banciao Police Precinct officers conducted a search in the city’s Shulin District (樹林), where they found 15 cannabis seedlings, a container of cannabis seeds and a workshop where firearms were made.

Police said they questioned a 44-year-old suspect surnamed Lin (林) who lives at the address.

He faces charges over alleged breaches of the narcotics act and the Controlling Guns, Ammunition and Knives Act (槍砲彈藥刀械管制條例), they said.

Police said that Lin protested that the search warrant was for firearms, and not for illegal drugs.

However, an officer told him: “Cannabis plants are illegal and were found during our search. We cannot pretend that we did not see them here.”

Comments will be moderated. Keep comments relevant to the article. Remarks containing abusive and obscene language, personal attacks of any kind or promotion will be removed and the user banned. Final decision will be at the discretion of the Taipei Times.