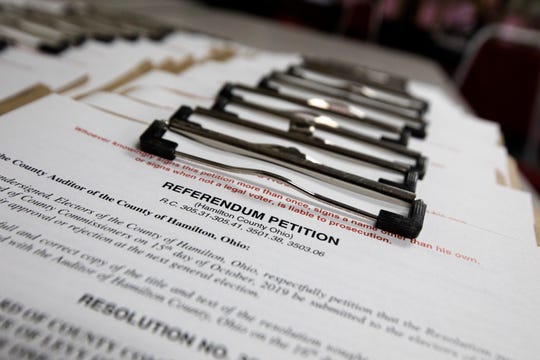 Ohio ballot initiative petition efforts, which rely on face-to-face contact and collecting signatures at large events, have been put on hold amid the coronavirus pandemic. (Photo: Albert Cesare / The Enquirer)

COLUMBUS – Referenda on recreational marijuana, voting rights, a minimum wage hike and more had been potentially headed to the ballot in Ohio this November.

But the coronavirus pandemic has effectively ended those campaigns.

They walk up to strangers, speak with them about the petition and share clipboards and pens.

“During this pandemic, that’s dangerous,” said Freda Levenson, an ACLU of Ohio attorney representing the Ohioans for Fair and Secure Elections campaign.

[ The Enquirer is providing most of its coronavirus-related stories free to readers. We can’t do this work without your support. Please consider a digital subscription to Cincinnati.com. ]

Campaigns have sought relief in court, asking for a reduced signature requirement or the ability to collect signatures online. A Franklin County judge last week said he didn’t have the authority to change constitutional ballot initiative requirements.

The campaigns are taking their case to federal court, arguing Ohio’s petition rules violate the U.S. Constitution in this unique situation. Levenson said it’s not acceptable for campaigns to postpone initiatives for a future election.

“The First Amendment says any infringement on speech, even if it’s temporary or brief is a violation of your rights,” Levenson said. “They can’t say ‘you can talk later.’ You have a right to say it.”

In order to qualify a constitutional amendment for the November ballot, groups had to collect valid signatures from at least 452,958 registered voters in 44 of Ohio’s 88 counties by July 1. Local initiatives need signatures equal to 10% of the votes cast in the last gubernatorial election.

One of the easiest days to get good signatures is on primary Election Day. Ohio’s health director Dr. Amy Acton closed the polls on the eve of the March 17 primary.

May and June are also prime signature-gathering months. The warmer weather brings more people outside and to large events. But Gov. Mike DeWine’s limited gatherings to 100 people on March 12 and then to just 10 people through May 29. Ohioans have been asked to keep 6 feet away from others while out in public.

Those restrictions prompted many spring and summer festivals to cancel or postpone festivities.

It also prompted the Regulate Marijuana Like Alcohol campaign to temporarily suspend its effort. The group’s initial petition was rejected March 23, the same day Ohio’s stay-at-home order went into effect.

“We made the decision early on that the health of our volunteers, supporters, medical marijuana patients, and the general public would be our primary concern,” campaign spokesman Tom Haren said. “As Ohio begins the process of re-opening, we are evaluating our options and hope to have more to share soon.”

Candidates, minor parties and ballot initiatives in several states are seeking relaxed and alternative requirements during this unprecedented time.

In Oregon, anyone can download a petition page, sign it and return it by mail. Oklahoma’s chief election official postponed the deadline for signatures until 90 days after the state’s declared public emergency ends.

Judges in Illinois and Michigan have extended deadlines or waived signature requirements for parties or candidates.

But Ohio’s statewide initiative rules are mostly written in the state Constitution, which can only be changed by a voter-approved amendment. One of those rules: signatures must be in ink and a petition circulator must sign off to affirm they witnessed each one.

“As applied, narrowly to this specific time and circumstances, they are operating as a ban on first amendment activity,” Levenson said.

In their complaint, Ohioans for Secure and Fair Elections and Ohioans for Raising the Wage suggested several ways to address burdens caused by the pandemic. Those included the ability to collect signatures online, reducing or waiving signature requirements and extending the deadline to qualify for the November ballot.

“With a candidate, even if you waive the signature requirement, you still have an election and people get to vote,” he said. “With ballot issues, signature requirements can be quite onerous. They play an important gate-keeping function. Courts will want to keep that in place without making things unduly hard to get things onto the ballot that are very important to people.”

The legislature could change some of the rules. But in recent years there have been legislative efforts to make it harder to get on the ballot, not easier.

A group working to update the state’s constitution recommended allowing electronic signature collection in 2017. But that suggestion was not adopted in the larger group’s final recommendations.

“Many states have passed common-sense, bipartisan reform measures to make their elections more efficient and accessible,” Ohioans for Secure and Fair Elections Campaign Manager Toni Webb said. “Ohio must do the same.”

With reporting from the Associated Press.